Johnny Depp in Dark Shadows on Blu-ray in October 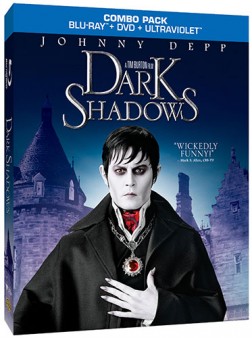 Warner has dated and detailed the Tim Burton directed big screen version of Dark Shadows starring Johnny Depp for home video release on Blu-ray, DVD, and Digital Download. The film will be hotting store shelves on October 2, 2012 on Blu-ray Combo Pack at an SRP of $35.99 and on DVD for $28.98.

EVERY FAMILY HAS ITS DEMONS IN
DARK SHADOWS
ARRIVING ON BLU-RAY COMBO PACK, DVD and DIGITAL DOWNLOAD
ON OCTOBER 2 FROM
WARNER BROS. HOME ENTERTAINMENT GROUP

Burbank, CA, July 31, 2012 – Vampires, werewolves and a family of quirky characters collide as “Dark Shadows” comes back to life, arriving onto Blu-ray Combo Pack, DVD and Digital Download on October 2 from Warner Home Entertainment Group. Directed by Tim Burton and starring Johnny Depp as Barnabas Collins, “Dark Shadows” follows a vampire awoken from a multi-century sleep only to find that the family business is near ruin, his descendents are struggling and his past may come back to haunt him.

In the year 1750, Joshua and Naomi Collins, with young son Barnabas, set sail from England to start a new life in America, where they build a fishing empire in the coastal Maine town that comes to carry their name: Collinsport. Two decades pass and Barnabas (Johnny Depp) has the world at his feet. The master of Collinwood Manor, Barnabas is rich, powerful and an inveterate playboy…until he makes the grave mistake of falling in love with a beauty named Josette DuPres (Bella Heathcote) and breaking the heart of Angelique Bouchard (Eva Green). A witch in every sense of the word, Angelique dooms him to a fate worse than death—turning him into a vampire, and then burying him…alive.

Nearly two centuries later, Barnabas is inadvertently freed from his tomb and emerges into the very changed world of 1972, a stranger in an even stranger time. Returning to Collinwood Manor, he finds that his once-grand estate has fallen into ruin, and the dysfunctional remnants of the Collins family have fared little better, each harboring their own dark secrets.

Family matriarch Elizabeth Collins Stoddard (Michelle Pfeiffer) is the one person Barnabas entrusts with the truth of his identity. But his rather odd and anachronistic behavior immediately raises the suspicions of the live-in psychiatrist, Dr. Julia Hoffman (Helena Bonham Carter), who has no idea what kind of problems she’s really digging up.

As Barnabas sets out to restore his family name to its former glory, one thing stands in his way: Collinsport’s leading denizen, who goes by the name Angie…and who bears a striking resemblance to a very old acquaintance of Barnabas Collins.

1) BECOMING BARNABAS – It takes more than just a set of prosthetic fangs! Get the scoop from directly from Johnny Depp on his reimagining of this infamous and undead cult character.
2) WELCOME TO COLLINSPORT! – Explore every strange nook and peculiar cranny of the most spectacularly detailed city to never exist!
3) A MELEE OF MONSTROUS PROPORTIONS – Join the fight and experience the thrilling final battle sequence in a way that only Tim Burton and Johnny Depp could imagine.
4) ANGELIQUE: A WITCH SCORNED – Johnny Depp and Eva Green reveal the lurid details of their character’s centuries old lascivious and tumultuous relationship.
5) RELIVING A DECADE – From groovy bell bottoms to classic rock & roll, strut through the Collinsport of the 70s and discover the topsy-turvy world that Barnabas finds himself in after centuries in the grave.
6) DARK SHADOWY SECRETS – Watch out for exploding buildings and all manner of bizarre, supernatural occurrences as Tim Burton’s spectacular props and special effects wizards bring this eccentric world to crazy life.
7) THE COLLINSES: EVERY FAMILY HAS ITS DEMONS – Become scarily familiar with this creepy cast of quirky characters as Johnny Depp, Helena Bonham Carter and their co-stars reveal their unique working relationship.
8 ) COOPER ROCKS COLLINSPORT! – Shock rock the night away with the master of musical horror himself, Alice Cooper, as Johnny Depp and the cast invite him to rock the roof off of Collinsport Manor.
9) VAMPIRES, WITCHES AND WEREWOLVES, OH MY! – Uncover the method behind Tim Burton’s madness as he twists and tweaks his favorite classic movie monsters for the gothic universe of Dark Shadows.

On October 2, “Dark Shadows” will be available for download from online digital retailers including iTunes, Xbox, PlayStation, Amazon, Vudu and CinemaNow.

The film is also available digitally in High Definition (HD) VOD and Standard Definition (SD) VOD from cable and satellite providers, and on select gaming consoles.

*UltraViolet allows you to collect, watch and share movies and TV shows in a whole new way.  Available with the purchase of specially marked Blu-ray discs, DVDs and Digital Downloads, UltraViolet lets you create a digital collection of movies and TV shows.  Services such as Flixster and VUDU allow you to instantly stream and download UltraViolet content across a wide range of devices including computers and compatible tablets, smartphones, game consoles, Internet-connected TVs and Blu-ray players.  Restrictions and limitations apply.  Go to ultraviolet.flixster.com/info for details.  Learn about VUDU compatible devices at vudu.com.