A&E Home Entertainment has announced the release of the Blu-ray Edition of the LENNONYC, set to arrive just after the anniversary of the legendary Beatles’ death and timed to the 2011 Grammys on January 11, 2011 at a suggested retail price of$34.95. 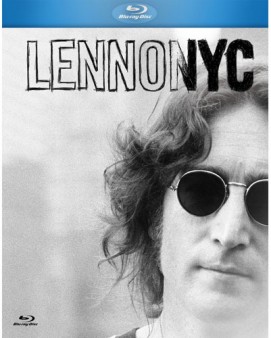 THE ULTIMATE TRIBUNE TO THE ULTIMATE MUSIC LEGEND – NOW ON PRISTINE BLU-RAY WITH OVER 20 MINUTES OF NEVER-BEFORE-SEEN INTERVIEWS!

In October 2010, John Lennon would be 70 years old. In December 2010, he will have been dead for 30-years. Yet, his art still haunts us. LENNONYC explores and celebrates the arc of Lennon’s solo career, the art and the choices that his and Yoko Ono’s intense creative and personal collaboration produced is a major focus. With unprecedented and exclusive cooperation from Yoko Ono, access to never-before seen material from the Lennon archives and conversations with his closest people – Yoko, Elton John, the photographer Bob Gruen, Ringo – LENNONYC is singularly poised to tell John Lennon’s story as it has never been told before – and as it will never be told again.

LENNONYC BLU-RAY EDITION, released on the heels of the media frenzy surrounding the anniversaries of Lennon’s life and death, and timed to the 2011 Grammys, is presented in amazing 1080p high definition with 5.1 surround sound, and features over 20 minutes of never-before-seen bonus interviews with Lennon’s friends and family, giving viewers deeper insight into his life and career.  Featuring rare recordings of Lennon’s greatest solo hits: “Mind Games”, “Whatever Gets You Thru the Night”, “I’m Losing You”, “Nobody Loves You When You’re Down and Out”, and, of course, “Imagine”, LENNONYC BLU-RAY EDITION is the ultimate tribute to the ultimate music legend.