Paramount Home Entertainment has announced the forthcoming Blu-ray and DVD release of the acclaimed drama, The Fighter, starring Christian Bale, Mark Wahlberg and Amy Adams. Priced at an SRP of $29.99 for the Blu-ray Combo Pack (Blu-ray + DVD), the title will be released on March 15, 2o11, the release will feature a 1080p high definition transfer with English 5.1 DTS-HD Master Audio and English, English SDH, French and Spanish subtitles. Extras include: 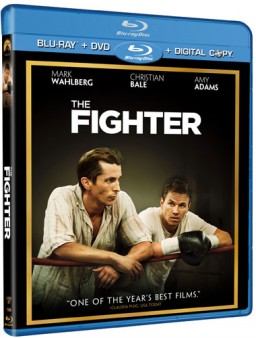 See the press release below for further details.:

Critically-Acclaimed Story of Triumph Enters the Ring on Blu-ray™, DVD and VOD March 15, 2011

THE FIGHTER Blu-ray/DVD Combo Pack with Digital Copy and standard DVD both include feature commentary by David O. Russell and a making of documentary entitled “The Warrior’s Code: Filming The Fighter”.  The Blu-ray/DVD Combo also includes “Keeping The Faith”, the real-life story of Micky and Dicky as told by family and friends, deleted scenes and a digital copy of the film.

The Blu-ray/DVD Combo pack breakdown is as follows:
Blu-ray: