Mitsubishi is in New York City this week showing off their latest 3D technology to the press and Blu-rayDefinition was honored to be invited. In addition to announcing the latest in their line of LaserVue DLP televisions, a 72″ whopper that displays the most nearly perfect 3D this side of an actual theatre, the company announced their 3D Starter Pack, in a similar move to what Samsung has been doing for the past few months with their 3D packages. 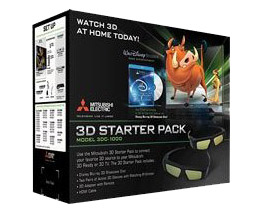 The company’s Model 3DC-1000 starter pack contains all the necessities for watching 3D at home including two pairs of active shutter 3D eyewear, a 3D emitter, 3D Adapter with remote, which is needed for use in converting the 3D signal on Mitsubishi’s 3D televisions, which have been shipping long before the latest 3D Blu-ray standard had been settled upon, an HDMI™ cable, and also features a Disney 3D showcase Blu-ray disc featuring 3D trailers of A Christmas Carol , Alice In Wonderland and Toy Story 3 along with an educational short on 3D presented by Disney’s infamous Timon and Pumba.  The 3D Starter Pack will be available in July at a SRP of $399.

Additionally, Mitsubishi’s 3D-A1 3D Adapter can be purchased separately for $99.