Sony Pictures Home Entertainment has announced they will be bringing the classic, nearly infinitely quotable 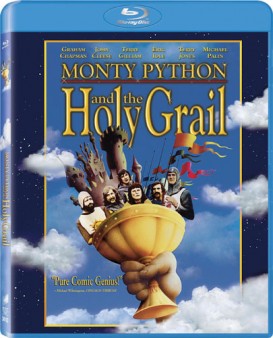 comedy Monty Python and the Holy Grail to Blu-ray with UltraViolet Digital Copy on March 6th, 2012 at a SRP of $19.99. The disc will feature 30-minutes of new exclusive features and will come with Second Screen functionality, with a new iPad App “The Holy Book of Days” also debuting in the Apple App Store for $4.99.

Second Screen Functionality and Rebate Offer for the Interactive iPad App “The Holy Book of Days,” Launching on the Apple App Store

CULVER CITY, CALIF. (January 23, 2012) – From the fertile minds of the 20th Century’s most brilliant and outrageous comedy troupe comes their most highly regarded comedy classic – Monty Python and the Holy Grail – debuting on Blu-ray™ with UltraViolet™ March 6th from Sony Pictures Home Entertainment. Their second feature film stars Graham Chapman, John Cleese, Eric Idle, Terry Gilliam, Terry Jones, and Michael Palin as we follow King Arthur and his knights in their search for the Holy Grail. Encounter the Black Knight, the Killer Rabbit, The Knights Who Say ‘Ni’! and the Black Beast of Aaaargh! The Blu-ray set is brimming with coconuts, shrubberies and swallows (African or European), OOPS, we mean loads of bonus materials, including over thirty minutes of new Blu-ray exclusive special features. The Blu-ray will also feature UltraViolet! With UltraViolet, owners of the Blu-ray will be able to add Monty Python and the Holy Grail to their free Digital Rights Library, enabling them to instantly stream or download the film. This medieval madness will be available on Blu-ray for $19.99 SRP.

Also debuting on March 6 is the first Monty Python interactive iPad app.   “The Holy Book of Days” is a rich companion to the film, letting fans explore each of the 28 days of the filming of the movie through outtakes, diaries, audio recordings, scripts, and scores of stills. New illustrations, animations, and the story of the filming in the Pythons’ own words make each day of the Holy Grail come alive. The app offers a second screen experience too, letting users control and navigate the Blu-ray™ from the iPad. “The Holy Book of Days” will be available for $4.99 in the App Store. For a limited time, Sony is offering a $5 mail-in rebate when consumers purchase both the Blu-ray and iPad app.

Monty Python and the Holy Grail has a running time of 92 minutes and is rated PG.