Panasonic today announced the debut of their first 2.1 channel Blu-ray Disc home theater system, the SC-BTX70. The SC-BTX70 features a compact form factor and slim design, which Panasonic is touting as being the perfect compliment to flat panel televisions. 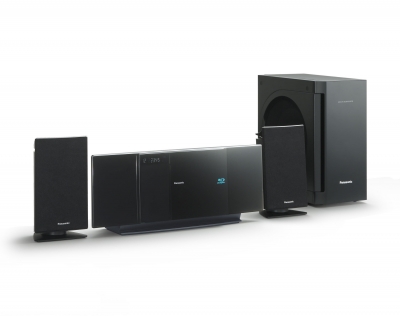 The two front speakers, which come with a new top mounted speaker design that Panasonic claims expands the listening area, are constructed with rigid, low-density bamboo cones. Panasonic has also provided a Kelton-type subwoofer for deep, reverberating bass. Also featured in the system is Panasonic’s 96-kHz Surround Re-master function to enhance the sound quality of CDs and other sources and raise the quality of the multi-channel audio data on Blu-ray Discs and DVDs to produce highly realistic sounds.

The slim unit’s power sliding door front panel hides behind it the start attraction, the SC-BTX70’s built-in Blu-ray Disc player, as well as a Universal Dock for iPod*, an SD memory card slot, and a USB terminal for viewing photos and videos taken with a digital still or video camera.  The system is also compatible with Panasonic’s VIERA Link.

Panasonic also touts the unit as being Energy Star compliant and says the unit uses less power due to its proprietary UniPhier LSI circuitry, which integrates all video processing onto a single chip.

In addition to these advanced functions, Panasonic took the environment into full consideration in designing the SC-BTX70. It is Energy Star qualified, and its UniPhier(R) LSI integrates all video signal processing circuits onto a single chip, which lowers power consumption and reduces the number of components.

The SC-BTX70 will be available in September with a suggested retail price of $999.95.