The wildly compelling chronicle of one of the pioneers of Internet commerce comes home on Blu-ray and DVD when MIDDLE MEN arrives on February 15, 2011 from Paramount Home Entertainment.  Described as “Boogie Nights meets Goodfellas” (Variety), the engrossing film about an ordinary businessman who becomes embroiled in a dark and dangerous world of questionable morals and organized crime during the early days of the World Wide Web is almost too bizarre and too hilarious to be true.  Luke Wilson (Old School) stars as Jack Harris, a man with a beautiful family, a successful career and an 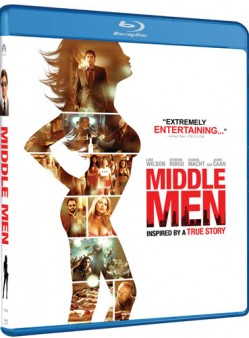 idyllic life.  That is, until he gets involved with two troubled geniuses (Giovanni Ribisi, Avatar; Gabriel Macht, The Spirit) who need business advice on getting their Internet scheme off the ground.  Soon Jack finds himself surrounded by conmen, mobsters and other unsavory characters as he struggles with his conscience…and becomes one of the wealthiest entrepreneurs of his time.  MIDDLE MEN also features an outstanding supporting cast including James Caan (The Godfather), Kevin Pollak (The Usual Suspects),  Kelsey Grammer (“Frasier”), Jacinda Barrett (New York, I Love You) and Laura Ramsey (The Ruins).