Reach The Final Destination in 3D on Blu-ray and DVD January 5th! 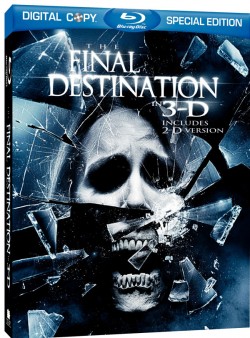 Synopsis:
After a strange premonition causes friends to abandon their day at the speedway, just before a crushing pileup hurtles cars into the bleachers, they believe that they have cheated Death.  But Death is only getting started.   While the group thinks they have a new lease on life, unfortunately for Nick and Lori, it is only the beginning. As Nick’s premonitions continue and the crash survivors begin to die one-by-one–in increasingly gruesome ways–Nick must figure out how to survive before he, too, reaches his final destination.

The Final Destination will be available in 3D on Blu-ray for a SRP of $35.99 and will include two pairs of 3D glasses inside.  The title will also be available on single disc DVD for $28.98 as as a digital download.

Blu-ray Special Features will include: