Paramount Home Entertainment has announced the forthcoming release of the thriller Case 39 on Blu-ray and DVD this January 4, 2011 at a suggested retail price of $29.99 (Blu-ray) and $19.99 (DVD). 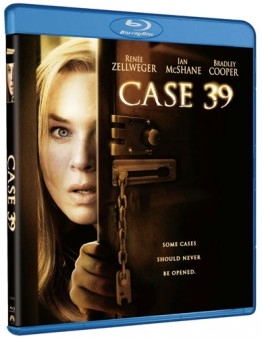 Evil is Unleashed January 4, 2011 on Blu-ray™ and DVD Including
Behind-the-Scenes Featurettes, Extensive Deleted Scenes and an Alternate Ending

HOLLYWOOD, Calif. – Academy Award® winner Renée Zellweger faces evil in a shocking and unexpected form in the terrifying supernatural thriller CASE 39, debuting on Blu-ray and DVD January 4, 2011 from Paramount Home Entertainment.
Co–starring Bradley Cooper (The Hangover) and Golden Globe winner Ian McShane (Deadwood), CASE 39 is a heart-stopping chiller with a startling ending.  A family services social worker (Zellweger) fights to save a little girl with a haunted past, only to find out that this mysterious new case turns into a nightmare she may never survive.  Filled with frightening suspense, the CASE 39 Blu-ray and DVD include the featurettes “Filed Under ‘Evil’: Inside Case 39”, “Turning Up the Heat on the Chill Factor”, “Inside the Hornet’s Nest”, “Playing with Fire” and nearly 30 minutes of deleted scenes, including a gripping alternate ending.
CASE 39 Blu-ray & DVD
The CASE 39 Blu-ray is presented in 1080p high definition with English 5.1 DTS-HD Master Audio, French 5.1 Dolby Digital, Spanish 5.1 Dolby Digital, Brazilian Portuguese 5.1 Dolby Digital and English Audio Description and English, English SDH, French, Spanish and Brazilian Portuguese subtitles. The DVD is presented in widescreen enhanced for 16:9 televisions with Dolby Digital English 5.1 Surround, French 5.1 Surround, Spanish 5.1 Surround and English Audio Description and English, French and Spanish subtitles.

The discs include the following special features in standard definition: