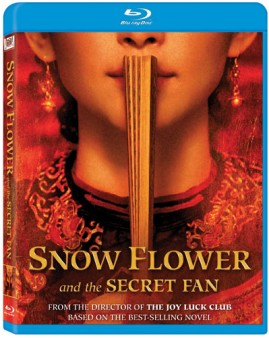 and DVD November 1, 2011. The Blu-ray will feature Mandarin DTS-HD Master Audio 5.1, English Dolby Digital 5.1, and English, French, and Spanish subtitles plus a featurette entitled The Sworn Sisterhood of the Secret Fan.

Growing up in 19th century China, Lily (Bingbing Li, The Forbidden Kingdom) and Snow Flower (Gianna Jun, My Sassy Girl) are brought together in a Laotong friendship—a lifelong bond between two women who rely on each other for companionship and comfort. Amid the civil unrest and gender discrimination of the era, the pair deals with life’s hardships together until they are separated by marriage and childbirth. As sworn sisters, however, the women continue to communicate through the secret Chinese language of nushu, hiding their stories and messages within the folds of delicate silk fans.

In present day Shanghai, the Laotong’s descendants Nina (also played by Li) and Sophia (also played by Jun) struggle to maintain the intimacy of their own childhood friendship in the face of demanding careers and complicated love lives. Drawing on lessons of the past, the two modern women must understand the story of their ancestral connection or risk losing one another forever. What unfolds are two stories, generations apart, but everlasting in the notion of love, hope and friendship.