Hey South Park fans, the long-running, politically incorrect Comedy Central animated hit is heading to Blu-ray and DVD from Paramount Home Entertainment on April 26 to coincide with the kick off of the new, 15th season of the series on the April 27th.

Additionally, Season 15 episodes will be available in HD on iTunes, Sony Playstation Network,  Amazon Video on Demand, xBox Live and at SouthParkStudios.com. 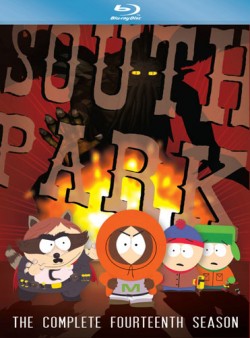 NEW YORK, April 12, 2011 – The foul-mouthed fourth-graders of “South Park” are back for their 15th season with seven all-new episodes beginning Wednesday, April 27 at 10:00 p.m. ET/PT on COMEDY CENTRAL.
On Tuesday, April 26, “South Park: The Complete Fourteenth Season” will be released nationwide on DVD and Blu-ray by COMEDY CENTRAL Home Entertainment and Paramount Home Entertainment.  In addition to all 14 episodes, the DVD and Blu-ray include mini-commentaries on all episodes by creators Trey Parker and Matt Stone, never-before-seen footage and deleted scenes.