Universal Studios Home Entertainment have revealed the specs for the Blu-ray and DVD releases of Battlestar Galactica Season 4.5 and a first look at the Battlestar Galactica: The Complete Series artwork. The two highly anticipated sets are due for release on July 28th, 2009. 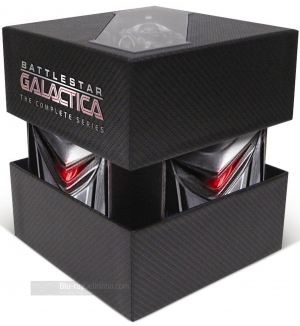 ) and will feature a DTS-HD Master Audio 5.1 soundtrack. The Battlestar Galactica: The Complete Series Blu-ray set will have an SRP of  $349.98 (Currently $244.99 on Amazon

Hailing  Battlestar Galactica: Season Season 4.5 as “the must-own home entertainment release of the year Universal have revealed that the set will feature over 13 hours of  extras, with three extended episodes including the series finale that never aired on television, never-before-seen deleted scenes, behind-the-scenes featurettes, and commentary and podcast interviews with Executive Producers Ronald D. Moore and David Eick.  The Blu-ray edition also includes Universal’s  U-Control and features in addition to BD-Live capabilities.

BATTLESTAR GALACTICA: SEASON 4.5 BONUS FEATURES
EXCLUSIVE TO BLU-RAY:
• U-CONTROL:  Universal’s exclusive signature feature puts viewers one click away from
going deeper into the making of the film without ever leaving the movie.

• BD-LIVE™: Access the BD-Live™ Center through your Internet-connected player to get even more content, watch the latest trailers, and more!

• MY SCENES:  Pick your favorite scenes from the film to create your own video montage.
• THE MUSICIANS BEHIND DAYBREAK: Composer Bear McCreary interviews and explains how many unique musicians 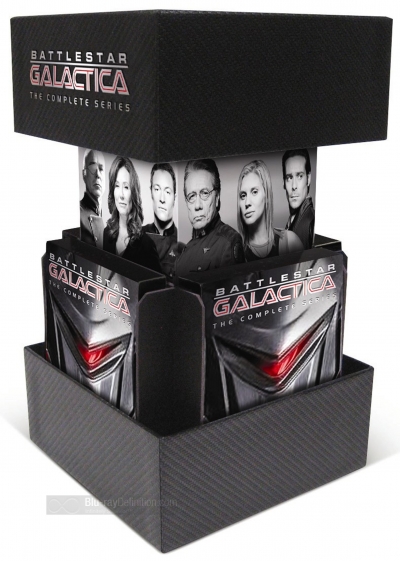 have contributed the show and specifically the series finale, “Daybreak.”

BONUS FEATURES (BLU-RAY and DVD):
• UNAIRED EXTENDED EPISODES: A Disquiet Follows My Soul, Islanded in a
Stream of Stars, and the stunning series finale, “Daybreak.”
• EXTRAS

Battlestar Galactica: The Complete Series is a  20-disc Blu-ray set and a 25- disc standard DVD set  and contains every episode of the SciFi channel series, together with extensive bonus materials.