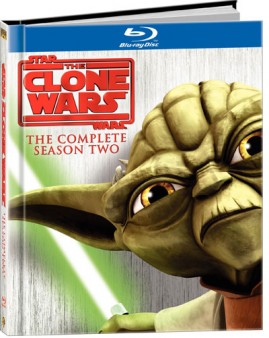 Warner and LucasFilm have announced the plans for release of Star Wars: The Clone Wars  the Complete Season Two in a two-disc box set out on Blu-ray and DVD 10/26/10, in time for the holiday shopping season. The Ultimate Collector’s Edition DVD will feature 22-episodes, director and artists commentaries, and a 68-page production journal with original sketches and artist notes.

Exclusive to the two-disc Blu-ray collection will be The Jedi Temple Archives: Extensive Database of Early Animation, Concept Art, and 3D Turnaround.