Streets of Fire on Blu-ray in November

UK distributor Second Sight has officially announced they will be bringing Walter Hill’s 80’s action classic Streets of Fire, starring Diane Lane, Willem Defoe, Michael Parẻ, and Rick Moranis to Blu-ray on November 18, 2013. The Blu-ray will have a RRP of £17.99 and features including “Revisited”, a new feature-length documentary featuring interviews with Walter Hill, Michael Parẻ and others. See below for further details.

‘Action cinema in its purest form’ 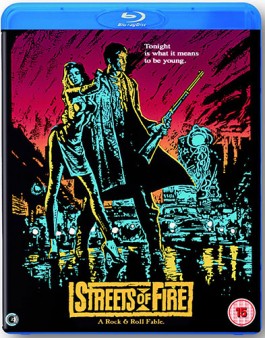 This highly stylised rock and roll fable has gained a huge cult following since its original release in 1984 and with its back drop of rain drenched, neon-lit streets is one of the most visually iconic films of the decade. It features an all-star cast including Diane Lane (Man Of Steel, The Perfect Storm), Willem Defoe (Spider-Man, The English Patient), and Rick Moranis (Ghostbusters, Honey I Shrunk The Kids) and comes to Blu-ray for the first time with a stunning new transfer and featuring some fantastic bonus features on 18 November 2013.

Big time rock singer Ellen Aim (Lane) is playing a gig in her hometown when a local bike gang The Bombers, led by the menacing Raven (Defoe), storm the stage and kidnap her. Tom Cody (Micheal Paré – The Virgin Suicides, The Philadelphia Experiment), a tough ex-soldier and Ellen’s ex-boyfriend returns home to get her back and he’s ready to take on the whole gang.

With its outstanding soundtrack and fast-paced action, Streets of Fire is a stylish rock and roll hit.