UK distributor Arrow Video has officially announced the release of Texas Chainsaw Massacre 2 in a special 3-disc limited edition UK Blu-ray edition for October 14, 2013, just ahead of the Halloween season.  The film is transferred to Blu-ray by Director of Photography Richard Kooris and featured in a 1080p presentation on Blu-ray with original soundtrack in uncompressed PCM 2.0 audio. Extras include early films from filmmaker Tobe Hooper, a 100-page bound book and more. See below for more details. 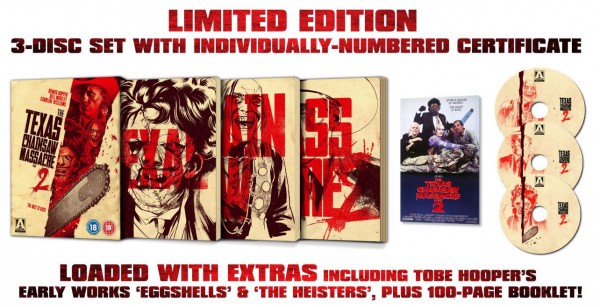 Arrow Video is buzzed to announce the 3-disc limited edition UK Blu-ray release of Tobe Hooper’s The Texas Chainsaw Massacre 2. This 3-disc Blu-ray set will be available to own in the UK on 14th October and include re-mastered High Definition digital transfers of not one, but three Tobe Hooper movies. Alongside The Texas Chainsaw Massacre 2, the set will include both The Heisters (1965) and Eggshells (1970) which have now been fully restored. All three films will be included within the newly illustrated limited edition release which also includes a host of extra features.

Synopsis
In 1974, Tobe Hooper quite literally changed the face of horror with his landmark film The Texas Chain Saw Massacre. Although the hulking Leatherface and his trusty power tool left an indelible mark upon the cinematic landscape, it wouldn’t be until 1986 that the buzz came back… in The Texas Chainsaw Massacre 2!
Relocating the cannibalistic Sawyer clan to a cavernous, labyrinthine dwelling beneath an amusement park, Hooper’s deliciously demented sequel sees Leatherface and Co. continue their murderous exploits afresh. This time around, local DJ Stretch runs afoul of the Sawyers when she gets mixed up in the brutal slaying of two youngsters. Meanwhile Lieutenant ‘Lefty’ Enright is hell-bent on avenging the murder of his nephew Franklin who perished in the original massacre.

A cult classic in its own right, The Texas Chainsaw Massacre 2 serves up a heady blend of gratuitous gore, socio-political critique and jet-black humour – whilst Dennis Hopper’s unhinged turn as Lefty needs to be seen to be believed! Whichever way you skin it, Leatherface’s second cinematic outing is an uncompromisingly delirious vision from one of the masters of horror.

Exclusive perfect-bound book covering everything you wanted to know about Tobe Hooper, chainsaws and more! Featuring new writing on the director’s early works by Brad Stevens, an investigation of Tobe Hooper’s three-picture Cannon deal by Calum Waddell, new writing on The Texas Chainsaw Massacre 2 by John Kenneth Muir, a look at the film’s long battle with the BBFC and an exclusive interview with Hooper by Stefan Jaworzyn, author of The Texas Chainsaw Massacre Companion, rounded off with an appraisal of the highs and lows of the Texas Chainsaw franchise by Joel Harley, all illustrated with archive stills.