Thor Brings Down the Hammer On Blu-ray 3D, Blu-ray, DVD in September 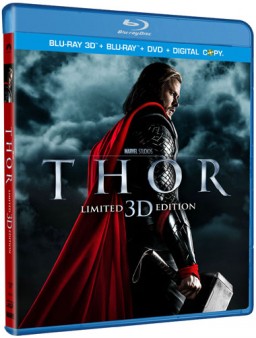 On September 13, 2011, The Thrilling Epic Adventure Debuts in a 3-Disc Set Featuring
Blu-ray 3D™, Blu-ray and DVD, and in a 2-Disc Blu-ray/DVD Combo with Over 80 Minutes of Revealing Content, Including an Exclusive Look at Marvel’s The Avengers

HOLLYWOOD, Calif. (July 12, 2011) – From Marvel Studios and Paramount Pictures comes a unique and compelling twist on the Super Hero genre with the out-of-this-world warrior THOR, debuting on high definition Blu-ray 3D, Blu-ray and DVD September 13, 2011.  Called “spectacular” (USA Today), “thrilling, entertaining and cool” (Ain’t It Cool News) the phenomenal screen debut of the legendary God of Thunder took audiences by storm, earning more than $440 million at the global box office.  When the arrogant god is banished to Earth from his home world, Asgard, and then pursued by the darkest forces of Asgard, he must learn what it takes to become a true hero in this exhilarating story that “delivers epic fireworks” (Rolling Stone).  Featuring an all-star cast including Chris Hemsworth, Natalie Portman and Anthony Hopkins, stunning visual effects and explosive action sequences, THOR wields outstanding entertainment that the whole family can enjoy.

The THOR three-disc set includes the film on Blu-ray in high-definition 3D and on high definition 2D, as well as on standard definition DVD with a digital copy.  The two-disc Blu-ray/DVD combo pack includes a high definition presentation of the film, plus a standard definition presentation with a digital copy.  Both sets come fully loaded with 80 minutes of immersive bonus materials including an exclusive special feature that goes deeper into the Marvel Universe, a sneak peek into Marvel’s The Avengers, an unprecedented look inside the world of director Kenneth Branagh and much more.

About Thor:
Marvel Studios expands its film universe with a new type of Super Hero: Thor. This epic adventure spans the Marvel Universe; from present day Earth to the realm of Asgard. At the center of the story is The Mighty Thor, a powerful but arrogant warrior whose reckless actions reignite an ancient war. Thor is cast down to Earth and forced to live among humans as punishment. Once here, Thor learns what it takes to be a true hero when the most dangerous villain of his world sends the darkest forces of Asgard to invade Earth. Directed by Kenneth Branagh and produced by Kevin Feige, with Alan Fine, Stan Lee, David Maisel, Patricia Whitcher and Louis D’Esposito serving as executive producers from a screenplay by Ashley Edward Miller & Zack Stentz and Don Payne and a story by J. Michael Straczynski and Mark Protosevich, this fantasy epic  stars Australian actor Chris Hemsworth as the god of thunder, Natalie Portman as Jane Foster, a young woman who befriends Thor on Earth, Tom Hiddleston as Thor’s evil brother Loki, with Rene Russo as Frigga, the wife of Odin,  mother to Thor and Loki, and Anthony Hopkins as Odin, Thor’s father and king of Asgard. Expect to see agents of S.H.I.E.L.D., previously seen in the Iron Man movies, foreshadowing the coming of Marvel’s The Avengers! Thor was released by Paramount Pictures on May 6, 2011.

About Marvel Entertainment
Marvel Entertainment, LLC, a wholly-owned subsidiary of The Walt Disney Company, is one of the world’s most prominent character-based entertainment companies, built on a proven library of over 8,000 characters featured in a variety of media over seventy years.  Marvel utilizes its character franchises in entertainment, licensing and publishing.  For more information visit www.marvel.com.