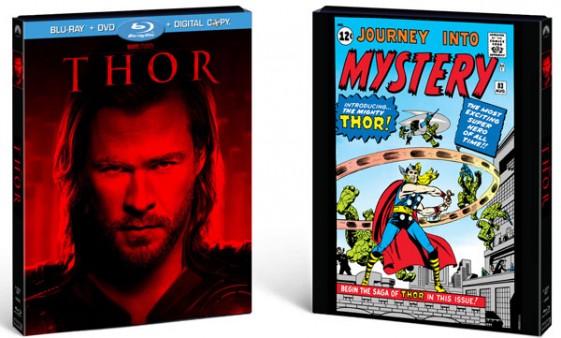 HOLLYWOOD, CA—Beginning on August 23, 2011, BestBuy.com will give fans the opportunity to pre-order the Blu-ray/DVD Combo pack of the blockbuster hit Thor in sensational, limited edition packaging exclusive to the retailer.  From Paramount Pictures and Marvel Studios, the phenomenal screen debut of the legendary God of Thunder took audiences by storm, earning more than $448 million at the global box office.

The collectible package features the very first image of Marvel’s Thor, which appeared in the comic book “Journey into Mystery” #83 in August 1962 with cover art by Jack Kirby and Joe Sinnott.  The vintage image invites consumers to “Begin the saga of Thor in this issue!”.

In addition, every person who pre-orders the Thor Blu-ray/DVD Combo prior to September 13, 2011 on BestBuy.com will receive a one-month subscription to Marvel Digital Comics Unlimited ($9.99 value).

The Thor Blu-ray/DVD Combo debuts on September 13, 2011 and includes a digital copy of the film, as well as 80 minutes of immersive bonus materials including an original short film Marvel One-Shot: The Consultant, an unprecedented look inside the world of director Kenneth Branagh, a sneak peek into Marvel’s The Avengers, and much more.

About Thor:
Marvel Studios expands its film universe with a new type of Super Hero: Thor.  This epic adventure spans the Marvel Universe; from present day Earth to the realm of Asgard.  At the center of the story is The Mighty Thor, a powerful but arrogant warrior whose reckless actions reignite an ancient war.  Thor is cast down to Earth and forced to live among humans as punishment.  Once here, Thor learns what it takes to be a true hero when the most dangerous villain of his world sends the darkest forces of Asgard to invade Earth.  Directed by Kenneth Branagh and produced by Kevin Feige, with Alan Fine, Stan Lee, David Maisel, Patricia Whitcher and Louis D’Esposito serving as executive producers, co-produced by Craig Kyle and Victoria Alonso, from a screenplay by Ashley Edward Miller & Zack Stentz and Don Payne and a story by J. Michael Straczynski and Mark Protosevich, this fantasy epic  stars Australian actor Chris Hemsworth as the god of thunder, Natalie Portman as Jane Foster, a young woman who befriends Thor on Earth, Tom Hiddleston as Thor’s evil brother Loki, with Rene Russo as Frigga, the wife of Odin,  mother to Thor and Loki, and Anthony Hopkins as Odin, Thor’s father and king of Asgard.  Expect to see agents of S.H.I.E.L.D., previously seen in the Iron Man movies, foreshadowing the coming of Marvel’s The Avengers!  Thor was released in theaters by Paramount Pictures on May 6, 2011.

About Marvel’s The Avengers:
Continuing the epic big-screen adventures started in Iron Man, The Incredible Hulk, Iron Man 2, Thor, and Captain America: The First Avenger, Marvel’s The Avengers is the Super Hero team up of a lifetime.  When an unexpected enemy emerges that threatens global safety and security, Nick Fury, Director of the international peacekeeping agency known as S.H.I.E.L.D., finds himself in need of a team to pull the world back from the brink of disaster.  Spanning the globe, a daring recruitment effort begins.  Starring Robert Downey Jr., Chris Evans, Mark Ruffalo, Chris Hemsworth, Scarlett Johansson, Jeremy Renner and Samuel L. Jackson, Marvel’s The Avengers is based on the ever-popular Marvel comic book series The Avengers, first published in 1963 and a comics institution ever since.  Prepare yourself for an exciting 3D event movie, packed with action and spectacular special effects, when Marvel’s The Avengers Assemble in summer 2012!

Marvel’s The Avengers, directed by Joss Whedon from a screenplay by Joss Whedon, is being produced by Marvel Studios’ President, Kevin Feige, and executive produced by Alan Fine, Stan Lee, Jon Favreau, Patricia Whitcher and Louis D’Esposito.  Marvel Studios’ Jeremy Latcham and Victoria Alonso will co-produce. The film will be released May 4, 2012.