The BDX3000 is a 3D Blu-ray player that features 7.1 analogue outputs, DTS-HD Master Audio and Dolby TrueHD decoding, HDMI 1.4, as well has a host of streaming media content, such as Pandora, Blockbuster on Demand, Vudu, and Netflix.

It supports Full HD 1080p resolution at 24fps, upconverts standard DVDs to near HD quality, and can playback video, photos, and music from a USB or SD/SDHC card on a connected HDTV. With internet connectivity on Toshiba’s models, bonus
features (BD-Live and Bonus View) can be accessed, such as social networking and chat features, interactive websites and games, unique trailers, or commentary from directors, the cast, and more, as available on select Blu-ray discs. The BDX3000 also features built-in Wi-Fi in addition to an Ethernet port. The player is available now and retails at a suggested retail price of $249.99.

WX800 Cinema Series:
Toshiba’s newly-announced 3DTV is an LED-backlit led design with no local dimming, according to the PR representative we spoke with. The set is less than 1.2 inches, and boasts Toshiba’s high-style flush front design with sleek chrome trim and eye-catching illusion stand. 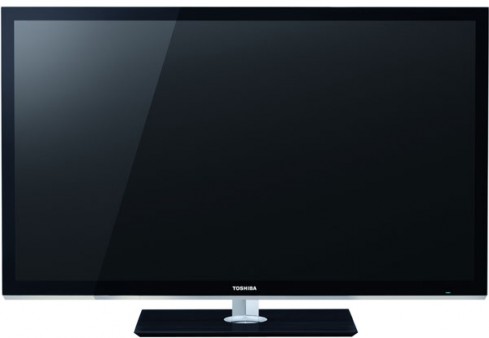 The WX800 processes multiple 3D input formats, including MPEG4-MVC, RealD, and select others for hassle-free enjoyment. The WX800’s CineSpeed® LED panel includes an advanced edge lighting system and DynaLightTM control for continuously optimized contrast resulting in an amazing 7M:1 contrast ratio for deep black levels, bright whites, and vibrant colors. What the display does not do is 2D-to-3D conversion, like competing 3D sets from Samsung.

The WX800 also features Toshiba’s ClearFrameTM 240Hz technology for clear fast motion movies and sports. Whether displaying the latest high action flick or the energy of a live football game, the WX800’s picture is clear and crisp.
The WX800 has built-in 802.11b/g/n Wi-Fi capability, and comes with Toshiba’s Enhanced NET TVTM service, which includes Yahoo! Connected TV; a vast collection of favorite and brand new streaming content options await via a simple connection to the Internet, and a touch of the remote, Netflix, VUDU, Facebook and Twitter, and explore new videos and photos on YouTube®, Flickr®, and more.