Warner Home Entertainment has detailed their forthcoming Blu-ray release of the Judy Garland classic, The Wizard of Oz on Blu-ray Disc, to be released day-and-date with the DVD version on September 29, 2009. The Wizard of Oz Ultimate Collector’s Edition will come in limited numbered editions with the film encoded in its original theatrical aspect ratio of 1.33:1 from an 8k scan on four BD50 Blu-ray Discs. [amazon-product align=”right”]B000Q66J1W[/amazon-product]

The Blu-ray and DVD collections will feature sixteen hours of bonus content and exclusive to the Blu-ray edition will be the six-hour documentary, MGM: When the Lion Roars. Additionally, Warner has loaded the set with collectible items, including a replica of the original 1939 campaign comic book, a 70th Anniversary Oz wristwatch, a 52-page commemorative book, and a replica of the 1939 film budget.

Other bonus features include: 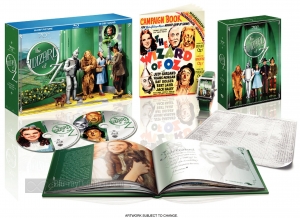 Full technical specs are not yet known, but Warner’s typical high definition 1080p/24 VC-1 video encoding with lossless TrueHD soundtrack can be expected.

The Blu-ray and DVD edition of The Ultimate Collector’s Edition will sell for $84.99 (Blu-ray) and $69.92 (five-disc DVD) respectively. There will also be a 2-disc Special Edition DVD release, which will retail for $25.98.