West Side Story: 50th Anniversary on Blu-ray for the Holidays

On November 15, 2011 MGM Home Entertainment will release West Side Story: 50th Anniversary Edition on Blu-ray for the first time ever just in time for the holiday shopping season. This classic musical transports the story of Romeo and Juliet to the streets of New York. It features a score by Leonard Bernstein and lyrics by Stephen Sondheim, memorable standards like “Maria,” “America,” “Tonight,” and “I Feel Pretty” and an all-star cast of Natalie Wood, Russ Tamblyn, and Rita Moreno. 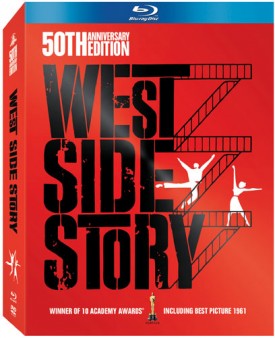 The Blu-ray will be available in a Limited Edition 4-Disc Boxed Set featuring 2 disc Blu-ray, newly-restored DVD, Tribute CD and collectible memorabilia, as well as a 2-disc Collector’s Edition Blu-ray.

LOS ANGELES, CA. – Five decades after its historic debut, a timeless classic returns to dazzle audiences young and old.  Based on the hit Broadway musical of the same name, the iconic film WEST SIDE STORY returns in brilliant Blu-ray form November 15, 2011 from Twentieth Century Home Entertainment.  With a record-breaking ten Academy Awards® including Best Picture, Best Directing and Best Original Score, the film took home more awards than any other movie-musical in the history of cinema.  This monumental production not only featured the timeless lyrics from master American composer Stephen Sondheim, but a brilliant score from Leonard Bernstein, and beautiful direction from Robert Wise.  WEST SIDE STORY: 50th Anniversary Edition boasts hundreds of hours of restoration, new 7.1 digital audio, and a collection of bonus features spotlighting the harmonious songs and elaborate dances of the original film.

This “brilliant” (The New Republic) film sets the ageless story of Romeo and Juliet against a backdrop of gang warfare in 1950’s New York.  A love affair is fated for tragedy amidst the vicious rivalry between two street gangs – the Jets and the Sharks. When Jets member Tony (Richard Beymer, The Longest Day) falls for Maria (Natalie Wood, Splendor in the Grass), the sister of the Sharks leader, it’s more than these two warring gangs can handle.  As mounting tensions rise, a battle to the death ensues and innocent blood is shed in a heartbreaking finale.
Featuring the famous songs “Maria,” “America,” “Tonight,” and “I Feel Pretty,” WEST SIDE STORY: 50th Anniversary Edition showcases thrilling performances by Best Supporting Actress® winner Rita Moreno (The King and I), Best Supporting Actor® winner George Chakiris (Two and Two Make Six) and Russ Tamblyn (How the West Was Won).  The Blu-ray will be available in a Limited Edition 4-Disc Boxed Set featuring 2 disc Blu-ray, newly-restored DVD, Tribute CD and collectible memorabilia, as well as a 2-disc Collector’s Edition Blu-ray. Prebook is September 7.

Twentieth Century Fox Home Entertainment, LLC (TCFHE) is a recognized global industry leader and a subsidiary of Twentieth Century Fox Film Corporation, a News Corporation company. Representing 75 years of innovative and award-winning filmmaking from Twentieth Century Fox, TCFHE is the worldwide marketing, sales and distribution company for all Fox film and television programming, acquisitions and original productions on DVD, Blu-ray Disc Digital Copy, Video On Demand and Digital Download. The company also releases all products globally for MGM Home Entertainment. Each year TCFHE introduces hundreds of new and newly enhanced products, which it services to retail outlets from mass merchants and warehouse clubs to specialty stores and e-commerce throughout the world.