The Wicker Man on Blu-ray in October

After launching worldwide search to find the original film elements for the classic British horror film in order to do a proper restoration, UK distributor StudioCanal have finally announced the official release date and details for the UK Blu-ray release of The Wicker Man. The Wicker Man: The Final Cut will be released in the UK on 14th October 2013 in limited 4-disc DVD and 3-disc Blu-ray editions. The sets will include:

See below for further details and cover art.

In celebration of the 40th Anniversary
First-ever Blu-ray release

THE WICKER MAN:
The Final Cut

“5*****
The Best BritishHorror Film Ever Made”
EMPIRE

STUDIOCANAL UK are proud to announce that they will be releasing the first ever full restoration of Robin Hardy’s cult classic THE WICKER MAN on DVD and Blu-ray for the first time, following a cinema reissue, in celebration of the 40th Anniversary.

STUDIOCANAL have been conducting an extensive worldwide search for film materials for THE WICKER MAN for the past year, including a public appeal to fans for clues as to the whereabouts of the missing original cut. Eventually a 35mm release print was found at Harvard Film Archives which director Robin Hardy has confirmed is the cut he had put together with distributors Abraxas in 1979 for the US release. This has been scanned at 4k and used to create the first ever full digital restoration of the film, with Robin Hardy’s guidance. 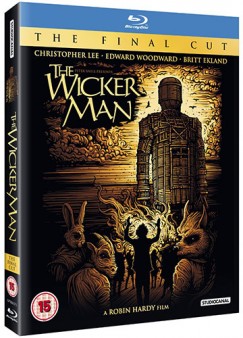 Robin accepts that film materials for the fabled Long Version or “Director’s Cut” will probably now never be found. “Sadly, it seems as though this has been lost forever. However, I am delighted that a 1979 Abraxas print has been found as I also put together this cut myself, and it crucially restores the story order to that which I had originally intended. This version of The Wicker Man will (optimistically!) be known as The Final Cut.”

When asked whether this cut measures up to the fabled original, long version, Robin Hardy puts it most succinctly: “The film as I saw it in the editing suite the other day fulfills my vision of what it was intended to convey to the audience.“

When a young girl mysteriously disappears on a remote Scottish island, devout Christian Police Sergeant Howie (Edward Woodward) travels there to investigate. He finds a close-knit and secretive pastoral community living on an island paradise, ruled over by mysterious Lord Summerisle (Christopher Lee), with beliefs very much at odds with his puritanism. The islanders mock Howie’s attempts to question them about the girl’s disappearance, and put the very foundations of his faith to the test. He begins to fear that the fate of the girl could be linked to the islanders’ failing crops and their belief that only a sacrifice of the highest order will change their luck. As May Day festivities intensify and the islanders’ behaviour becomes more frenzied, Howie’s quest to save the girl becomes a race against time…

Brilliantly scripted by Anthony Shaffer (Sleuth, Frenzy) and featuring a career-best performance by the legendary Christopher Lee, director Robin Hardy’s atmospheric use of location, unsettling imagery and haunting soundtrack gradually builds to one of the most terrifying and iconic climaxes in modern cinema.