Hello Blu-rayDefinition readers! We apologize for the lateness of this contest, but better late than never. We have been provided with four (4) copies of the Jet Li martial arts extravaganza Flying Swords of Dragon on Blu-ray 3D/Blu-ray Combo Pack  and are giving them away to four (4) lucky winners (1 copy each). Please see below for more details on the disc and how to enter. You can also read our review of the title here. 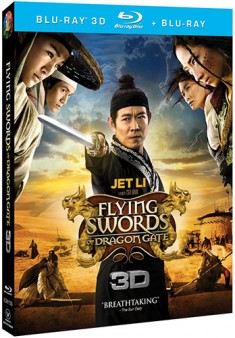 “… ‘Flying Swords’ is to be seen for its eye-popping action.” – V.A. Musetto, New York Post

BEVERLY HILLS, CALIF. (September 17, 2012) – An explosive mix of warriors, fugitives and assassins converge in the desert for a deadly showdown in FLYING SWORDS OF DRAGON GATE, the multi-award winning, martial arts epic reuniting genre master Tsui Hark (Once Upon a Time in China series, Detective Dee and the Mystery of the Phantom Flame) with legendary action icon Jet Li (The Expendables, Lethal Weapon IV, The Forbidden Kingdom) in an action-packed, visually-breathtaking cinematic experience debuting on Blu-ray, Blu-ray 3D, DVD and Digital October 2nd from Indomina Releasing.  The tale continues the saga of the Dragon Inn three years after it was left in ruins. A new gang has taken control of the inn as they secretly search for the entrance to the lost city of gold that legend says is hidden within. Their furtive mission is interrupted by the arrival of a beautiful fugitive from the palace accompanied by the swordsman who would die to protect her, and a group of assassins who will stop at nothing to find her.  In additional the Jet Li, the exciting drama boasts a stellar cast, including Zhou Xun (Painted Skin: The Resurrection), Chen Kun (Let the Bullets Fly), Li Yuchun (Bodyguards and Assassins), Gwei Lun Mei (Secret), Mavis Fan (The Silent War) and Fan Siu Wong (Wu Dang).

Synopsis
Set three years after Dragon Inn, innkeeper Jade has disappeared and a new inn has risen from the ashes – one that’s staffed by marauders masquerading as law-abiding citizens, who hope to unearth the fabled lost city buried in the desert.