Win a Copy of Strippers Vs. Werewolves on Blu-ray [Ended]

We have three (3) copies of the comedy/horror film Strippers Vs. Werewolves featuring Lucy Pinder and Robert Englund to award to three lucky readers of Blu-rayDefinition (1 copy each). Read our review or see below for more details on this title and information on how to enter to win! 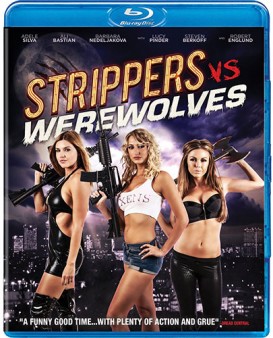 Stripping Has Never Been So Hairy!
STRIPPERS VS. WEREWOLVES

Synopsis:
A war between strippers and werewolves ensues when a member of a bloodthirsty pack of werewolves is murdered in a famous strip club. The girls who work there have until the next full moon before the werewolves’ vicious leader sends his wolf pack to hunt down the killers and seek retribution.  Problems arise for both parties when the wolf pack realizes the club owner is experienced in dealing with hostile lycanthropes and that one of their own is dating a dancer from the club.

Bonus Features Include:
§  Producers’ Commentary: Jonathan Sothcott and Simon Phillips
§  Behind the Scenes

Strippers vs. Werewolves has a runtime of approximately 95 minutes and is not rated.