Win a Copy of Tosh.0: Hoodies on Blu-ray (ended)

2 lucky readers of TheaterByte now have a chance to win one (1) of two (2) copies of Tosh.0: Hoodies on Blu-ray Disc, provided to us by Paramount Home Media Distribution.

See details on the title and how to enter below:

FANS CAN FINALLY GET THEIR HANDS ON DANIEL TOSH WHEN
“TOSH.0” IS RELEASED FOR THE FIRST TIME ON BLU-RAY AND DVD ON TUESDAY, JUNE 12
The First Collection Features the First 10 Episodes from Season One
All-New Episodes of “Tosh.0” Air Tuesdays at 10:00 p.m. ET/PT 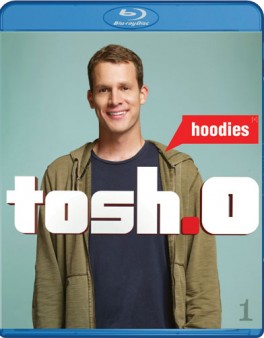 NEW YORK, June 5, 2012 – Finally, fans can own a piece of “Tosh.0” as COMEDY CENTRAL® will release compilations of the hit series on Blu-ray and DVD. The Blu-rays and DVDs will be released in multi-episode collections which will be compiled according to host Daniel Tosh’s famous sartorial selections. Over the course of the series run, each new set of episodes has featured Tosh donning various themed wardrobe choices including hoodies (season 1a), cardigans (season 1b), casual jackets (season 2a), deep Vs (season 2b), collared shirts (season 3a), exposed arms (season 3b), collegiate apparel (season 3c), high fashion (season 4a) and currently sick kicks for the ladies (season 4b).

The first collection of “Tosh.0” episodes, “Tosh.0: Hoodies,” includes 10 full-length episodes and will be released on Blu-ray and DVD by COMEDY CENTRAL Home Entertainment and Paramount Home Entertainment on Tuesday, June 12. The two-disc set includes popular “Web Redemptions” for the Afro Ninja, Miss Teen South Carolina and Chris Crocker, among others, along with guest appearances by Dave Attell, Bree Olson and Fred Willard, and much more.

Currently in its fourth season, “Tosh.0” airs Tuesday nights at 10:00 p.m. ET/PT. The series premiered on June 4, 2009 and features razor-sharp humor and biting commentary from comedian Daniel Tosh. The weekly, topical series delves into all aspects of the Internet from the absolutely absurd to the incredibly ingenious. Each episode includes Tosh giving subjects of notorious viral videos a second chance to redeem themselves from the embarrassment with which they have become synonymous with their very own “Web Redemption.”

The über-popular “Tosh.0” blog, which is one of COMEDY CENTRAL’s most-visited properties, continues to be updated daily with blog posts, web-exclusive behind-the-scenes content and interactive features. Viewers can follow Tosh on Twitter (currently with 5.8 million followers) as he live tweets during the show and also by becoming a fan of “Tosh.0” on Facebook (currently at 8.3 million fans).

Visit us on Facebook to Enter for a Chance to Win!