2001: A Space Odyssey (1968) revolves around two spaceflights and a human effort to learn more about life in other planets and their scientific advances.

Although the film centers on human effort to discover more about space, it consists of five different plot points.

I found the concept of humans evolving and trying to understand more about the world around them in the Earth at the beginning and later expanding to other planets very interesting. It could also be characterized as human history in terms of evolution, focusing more on the scientific part. I also liked the implied issue of the negative impact of technology on our lives  and the human factor in that. Even though the film’s duration was long and the pace slow, I cannot say that it tired me as much as I thought it would and definitely the musical selection from contemporary composer Ligeti (Aventures) and the famous opening fanfare, Richard Strauss’ Also sprach Zarathustra (performed by the Berlin Philharmonic conducted by Karl Böhm) contributed to that as well, giving it an artistic aspect. 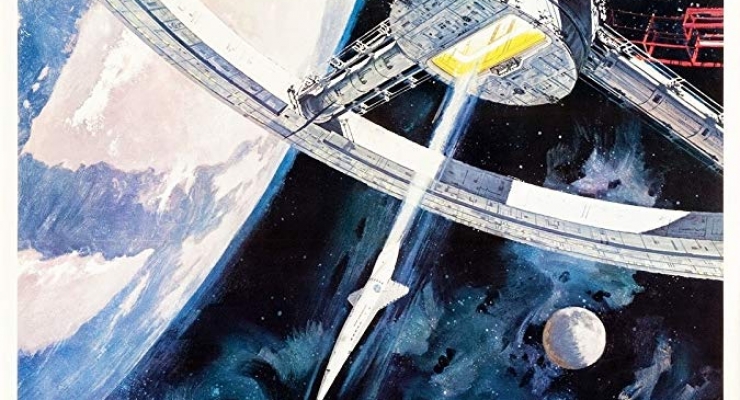 As 2001: A Space Odyssey is comprised of different subplots, the viewer sees many characters that could be characterized as protagonists in each part, though I felt like the real protagonist is not a human.

The main character of Moon spacecraft mission is Heywood Floyd. He appears to be confident about the mission even though some health issues arise, he deconstructs and deflects any fears and doubts from Russian scientists and encourages the spacecraft staff.

The other main character is David Bowman. At start, he seems to be confident about the mission, but as the spacecraft’s computer HAL 9000 proves to be problematic, he feels unnerved and tries everything beyond his power to save his colleague Poole and the mission.

Another character who seems to be in control of the situation for a long time is the AI HAL. Although it is not a living person, its skills are remarkable and for me it is the real protagonist of the third act, as we see humans (Bowman) totally depending on it in both positive and negative ways.

In terms of direction, what I liked most about Kubrick’s handling of the film was the alternation between slow-paced scenes, such as the opening with early man and quick ones as the scene with the EVA pod wandering around space. There are many times when we see this contrast in the film and it was successful evoking emotions like tension and suspense. Stanley Kubrick was great in that.

One of the most intriguing features of the movie is cinematography. There is an abundance of visual effects used and the result is spectacular, as if the viewer becomes a part of another reality, which looks nothing as in our everyday experience. Also there are many scenes with magnificent Earth or space scenery mostly peaceful and scarcely populated outdoor locations. But what impressed me most was the set design and cinematography of the spaceship’s interior, from the living rooms to the cockpit and generally many parts of the cabins. In other words it is a visually pleasing film and cinematography in fact is one of the main reasons why this movie is a must-see film.

The ending surprised me, because I just did not expect the film to end the way it did. It is entirely different from what we would have anticipated and it’s full of symbolism that is open to many interpretations. I found it smart and sophisticated. Still cinematography remains my favorite aspect of 2001: A Space Odyssey.