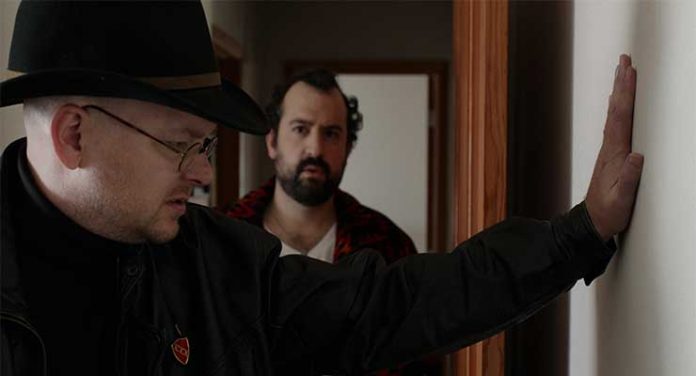 Dan Pappadakis (Steve Zissis, Roadies) is a very successful Los Angeles artist who has made a profitable career out of painting black circles. He and his wife Mary (Jennifer Irwin, The Goldbergs) get awakened by son Jasper AKA “Jazz” (Dax Flame, 21 Jump Street) who hears a strange noise coming from somewhere in their vacation home. As Dan makes the rounds of the rooms, he gets a brief vision of a creepy ghoulish creature crawling up the stairs.

In short order, they call in Joey Lee Dancey (Dan Bakkedahl, Observe and Report) to be their resident “ghost buster.” Joey Lee advises them that he would not get rid these spirits because they are not “malevolent” and, in fact, he considers it would be a “privilege” to live alongside of them. Not satisfied with this “consultation,” Dan goes to his agent and friend George (Steve Little, Camp Lazlo!) who puts him in touch with an “industrial-grade exorcist” Oscar “Os” Bijourn (Mark Proksch, Better Call Saul)

Dan returns to the cabin ostensibly to do some more painting while Mary and Jazz remain in LA. The clearly eccentric Os arrives to inspect the house and determines that there are several very “evil” entities that need to be exterminated at once. Although Mary has some reservations about hiring Os until she returns to the cabin, Dan forges ahead and Os starts arranging his paraphernalia that include boxes allegedly “cursed” (it does cost more for a curse than a blessing) by a Catholic priest at the Vatican. While the two men sip Merlot, the ghost box suddenly quivers and, bam, one spirit is boxed up and buried for good. 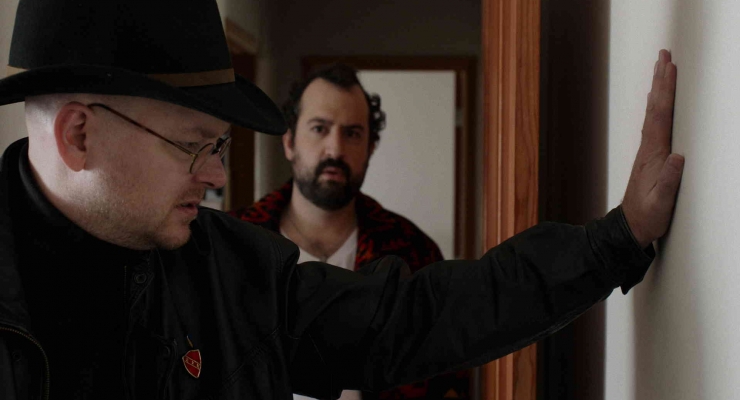 As Dan and Os start spending more time together, the latter opens up about his life and failed marriage. Os’s account of his misspent youth concludes with a “real-life” ghost story and, presto-change-o, another of the cabin’s ghosts bites the proverbial dust. Another Evil eventually morphs into a sort of quirky “buddy” movie as Dan reveals that his wildly successful black circle paintings have no hidden message. After much drinking and a hilarious evening with a hired stripper,  it becomes clear to Dan that Os is seriously unhinged. But Dan finds that getting rid of him may prove much more challenging than driving the ghosts out of his house. When Os sees the black circles as satanic portals, matters take a terrifying turn for the worse.

As a mostly two-character film, Zissis and Proksch play off each other quite well with dialogue that comes across as spontaneous rather scripted. First-time film writer/director Carson D. Mell has created a fairly successful comedy-horror flick that could almost make you believe in demonic possession and one that makes both visual (Drew Bienemann’s cinematography) and musical (Alexandra Johnstone’s sparse score) references to The Exorcist. With a final scene that will evoke memories of the conclusion of Psycho, Another Evil surmounts its schlocky, low-budget “ghastly” special effects and, if not everyone’s literal cup of tea, it does provide some chuckles and a bit of suspense.  After making the rounds of several major film festivals, Another Evil will have a limited theatrical screening and iTunes VOD debut on May 5, 2017.