Seemingly ageless Brad Pitt remains one of the hardest working actors on the big screen. Following his well-received turn in Once Upon A Time In Hollywood, Pitt now appears as a rocket jockey in Ad Astra that is, surprisingly enough, his first leading role in a space opera.

Major Roy McBride’s (Pitt) scientist father Dr. H. Clifford McBride (Tommy Lee Jones) disappeared many years earlier during a voyage to Neptune to establish the Project Lima space station, presumably in search of intelligent nonhuman life.  USA Space Command now believes that the elder McBride conducted experiments that may have gone awry and is triggering massive electrical power surge storms on Earth. Roy receives orders to traverse the boundaries of our solar system and to investigate what has really happened to his father and Project Lima.

Roy’s mission begins with a flight to the moon with his elderly escort Colonel Pruitt (Donald Sutherland) followed by a SpaceCom flight to Mars where special communications officers will try to get him in touch with his father. If this contact is successful, Major McBride and crew will then proceed on to the Project Lima station to unravel a mystery that has been three decades in the making. This journey will be hazardous as the space station is orbiting in lNeptune’s rock-laden belts and Astronaut McBride has no idea what awaits him in Project Lima’s antimatter laboratory.

It has been a half-century since Stanley Kubrick’s 2001: A Space Odyssey whetted our appetites for big screen portrayals of outer space travel and led to a long line of cinematic successors. Banking on this year’s renewed interest in the race for space (it marks the fiftieth anniversary of the first moon landing) writer/director James Gray set out to make “the most realistic depiction of space travel that has ever been put in a movie.” Such a statement may have set the bar impossibly high since last year’s First Man pretty much nailed the Apollo 11 experience. However, I was still willing to give the benefit of the doubt to Gray, Pitt and a strong supporting cast. 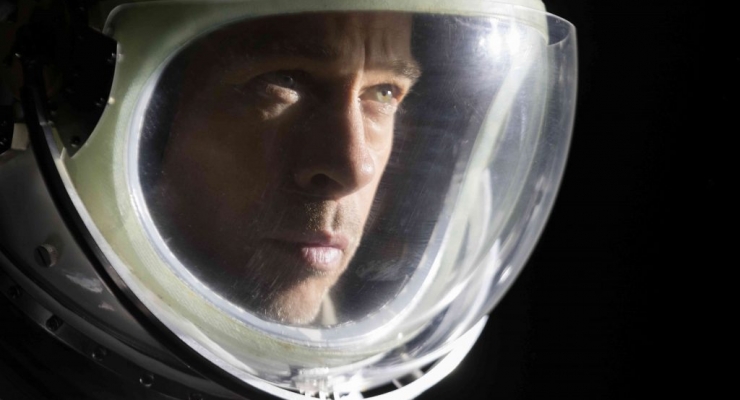 This turned out to be overly optimistic. Although Ad Astra seems to borrow from the trope of Joseph Conrad’s Heart of Darkness, it does so in a labored fashion, dragged down by Gray’s very deliberate pacing. Mercifully, the space action scenes break up the monotony of Brad Pitt’s inner monologues as he reviews his life, his strained relationship with his wife Eve (Liv Tyler), and his abandonment by an uncaring father who is considered a God by the astronaut community.  While Ad Astra attempts to provide a more “intellectual” view of space travel, it handles its existential questions in a rather cursory fashion.  What does come across, underscored by the frequent solo shots of Pitt’s face in a space helmet, is the loneliness of being in outer space, a theme that has received  better treatment in Interstellar, The Martian, and Gravity, to name but a few 21st-century sci-fi films. As the remaining cast gets relatively little screen time, Brad must pretty much carry this film alone and does his best with a lackluster script, interrupted by the device of frequent psych evaluations that determine his fitness for duty.  Reflecting on the motto referred to in the film’s title,  per aspera ad astra (“through hardships to the stars”), Ad Astra never really gets past its aspera.