Alita: Battle Angel is the new science fiction extravaganza based on the manga called Gunnm by Yukito Kishiro. This film adaptation, however, is spearheaded by James freakin’ Cameron, so on that alone, it will definitely be something of a wild ride in of itself.

Several hundred years into the future and after several great wars, the survivors have all grouped themselves into a large megalopolis known as Iron City. It’s a literal melting pot of man, culture, and machine parts. The majority of the citizenry are also cyborgs. Whether they are simply survivors of their environments or cyber enhancement junkies – it can go either way in this world. Everyone’s aspiration in Iron City is to make it up to the wealthy city in the sky known as Zalem. A large purse guarantees citizenship. Would you like to know more?

On one uneventful day Dr. Dyson Ido (Christoph Waltz) is out in a massive junkyard sourcing cybernetic parts for his practice when he comes upon the remnants of a young cybernetic girl. Feeling sympathetic and curious he collects these parts and takes them back to his laboratory. There, he restores and repairs the young cyber girl. Feeling a sense of sympathy and empathy he names her “Alita” after his deceased daughter of the same name.

Alita (Rosa Salazar) is curious by nature but beneath her cybernetics she wields immense power – in fact, she is so powerful that her core would be able to power Iron City several times over. Being that this is an origin story of sorts, we as the audience, are with Alita as she discovers what she truly is and where she comes from, and where she is going. The film is somewhat dense but is easy to digest because it guides the viewer with ease. I mention that it’s “dense” but I use that word as a term of endearment. 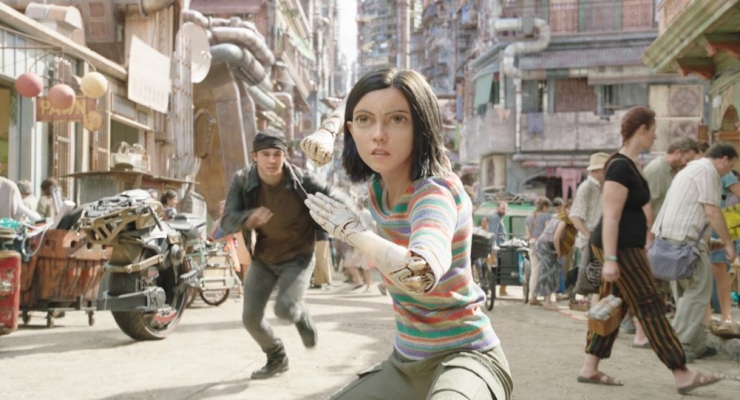 Alita: Battle Angel has been one of my most anticipated films of 2019 – even after it was delayed a few months ago, since it was originally going to be released last year. My main draw to the project was the teaming of James Cameron and Robert Rodriguez. James Cameron co-wrote the screenplay and produced while Rodriguez also co-wrote and directed the feature. It has also been one of James Cameron’s longest gestating productions. He was to direct it way back in the late 90’s but it never came to fruition until now. Since he’s so busy with Avatar for the rest of his directing career – there was no time for him to direct himself, so he personally selected Robert Rodriguez to tackle this 200-million-dollar behemoth of a film. Not only was this Rodriguez’s biggest budgeted film ever – I heard that every dollar allocated for the film was to be used. No way was he going to cut corners on the film. In watching the film and absorbing every frame information – it was money well spent.

Now the bigger question remains…will Alita: Battle Angel make money at the box office or will it bomb? Having watched the film and seeing Salazar convey emotions through those giant “anime eyes” – I think the character herself will grab the viewer’s attention because she’s about as humans as any of us. Likewise, with the impressive CGI throughout Iron City and all the characters and actors on display – there’s something for everyone. I should mention that the cast is rounded off with Jennifer Connelly. In addition to the excellent cast – see if you can catch the various high-profile and cult icon cameos sprinkled throughout the film. It was a lot of fun spotting some of these people in the film.

Now as far as my recommendation of the film – I’ve only seen it once and it was in 2D. I was hesitant because I had also read that it was post-converted and I don’t do post conversions. I was wrong in that regard and it seems that the film was actually shot in 3D, so now I will have to go back and watch it in real 3D. It appears that the six-story IMAX screens offer scenes that open up to 1.90:1, so maybe I’ll go that route or just settle for a nice Dolby Cinema 3D screening. In any event, I really enjoyed Alita: Battle Angel and hope people flock to the big screen to see it. It deserves to be experienced in theaters.

Alita: Battle Angel (TheaterByte Movie Review)
4 / 5 TheaterByte Rating
{{ reviewsOverall }} / 5 Users (0 votes)
Twentieth Century Fox | Lightstorm Entertainment | Troublemaker Studios | TSG EntertainmentStudios & Distributors
PG-13 (for sequences of futuristic violence and action)Rating Certificate
USACountry
English | SpanishLanguage
122 Mins.Run Time
2.39:1 ( 1.90:1 (IMAX version: some scenes)Aspect Ratio
Robert RodriguezDirector
James Cameron | Laeta Kalogridis | Robert Rodriguez | Yukito Kishiro (based on the graphic novel seriesWriter
14 Feb. 2019Release Date
The Film
Summary
In a dystopian future, a reactivated cyborg with no memory of her past goes on a quest to find out more about where she came from. Alita: Battle Angel is a grand spectacle that deserves to be seen on the biggest screen you can get to. The CGI and motion capture of the lead character is phenomenal. James Cameron and Robert Rodriguez have hit it out of the ballpark.
What people say... Login to rate
Order by: