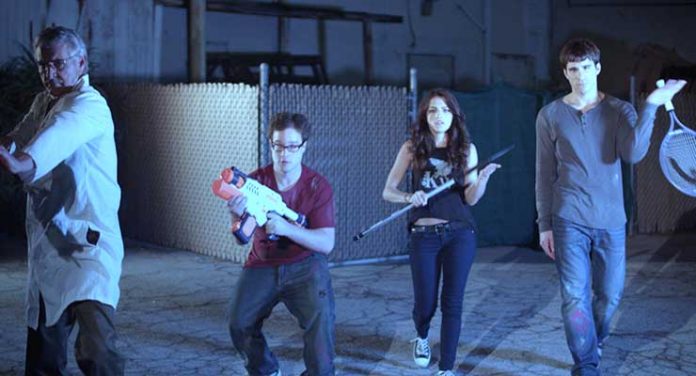 Director Scott Wheeler has spent his career as a visual effects producer and supervisor on such made-for-TV fare as Sharknado 5: Global Swarming and Planet of the Sharks. He evened managed to garner an EMMY nomination (Outstanding Visual Effects) for Space: Above and Beyond. With Attack of the Killer Donuts, Wheeler takes that same low-budget, Corman-esque sensibility behind the lens as director for a campy, comedy/horror adventure along the lines of Attack of the Killer Tomatoes.

In a small town with not action, loser doughnut shop clerk Johnny (Justin Ray, Disaster LA) is too fascinated with town hottie Veronica to see that she’s been using him for money — that he has to borrow from his mom to ‘lend’ to her — that he doesn’t see that she’s not really his girlfriend. Meanwhile, his best friend since fourth grade Michelle (Kayla Compton) has a secret crush and is jealous of his non-relationship with Veronica. Even bigger loser Howard (Ben Heyman) has no friends except Johnny and hangs out at the Dandy Donut shop all day and night so he can hang out with Johnny. All of this keeps them so preoccupied that none of them notices that Johnny eccentric mad scientist uncle Luther (Michael Swan) has invented a reanimation serum that he accidentally infects the doughnuts in the doughnut shop with. Unaware, the three of them continue to serve the infected donuts to costumers. Cue the rise of a swarm of toothy, flesh-eating donuts that terrorize the sleepy town. 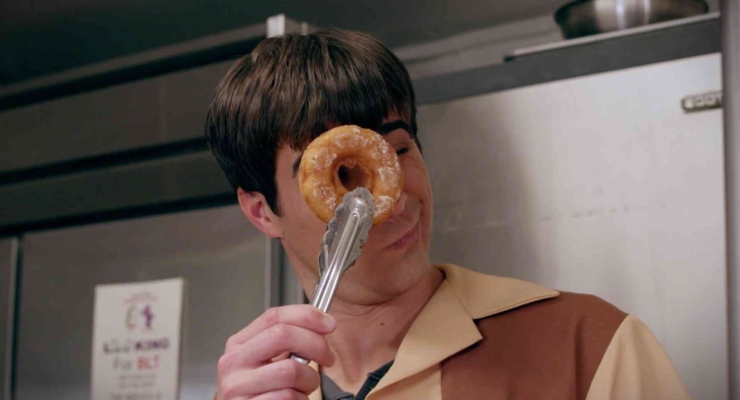 To call this madcap and nonsensical may be giving it too much credit. I’m all for some weird cult horror once in a while, but Attack of the Killer Donuts is filled with so many cliché horror tropes it is hard to count them all. It hearkens back to films like Reanimator and Attack of the Killer Tomatoes with its mad scientists, strangely animated non-sentient objects, and gore that is both unreal yet sickening at the same time.

Some of these things would be fine in the context of a cult-horror film if Wheeler and the screenwriters could be consistent, but plot holes abound in Attack of the Killer Donuts. For example, in the first scene when Johnny is frantically looking for his tablet and realized his crazy Uncle Luther has it, he ends up retrieving not a tablet, but a MacBook Pro laptop, which he then takes in to the doughnut shop to get his best friend and obvious love of his life Michelle to fix for him. See, she’s some sort of computer whiz who, we are informed in a scene, fixes computers for her brother’s paying customers, which he tells them he is the one fixing. Not only is it a plot hole that the tablet turned into a MacBook Pro, but we were also treated to a useless side scene about Michelle being a genius at fixing computers and her brother, whom we never see again. We haven’t even gotten to the part where they are calling Uncle Luther’s serum a ‘reanimation’ serum when it is animation doughnuts that were never alive or animated to begin with.

The look of Attack of the Killer Donuts is about what one would expect from a made-for-TV affair, even though this has had a limited run theatrically at film festivals previously and will be making a limited run in the US theatrically, which is o say, it won’t be winning any awards for production design or visual effects any time soon. When you see the attacking doughnuts being tossed at the actors from off-screen, you’ll understand.

Attack of the Killer Donuts is in theaters (limited) and on VOD November 17, 2017.