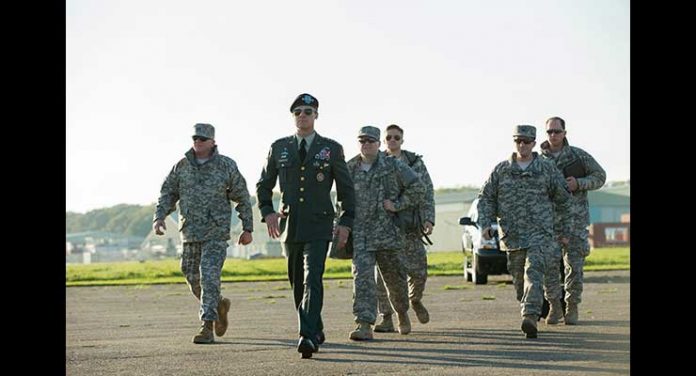 “What do you do when the war that you are fighting just cannot possibly be won in any meaningful sense? Obviously, you sack the guy not winning it and bring in some other guy.” So begins a narration by journalist Sean Cullen (Scoot McNairy) that weaves in and out of this film and laden with snarky commentary about the ongoing action (or lack thereof). It was real-life Rolling Stone reporter Michael Hastings’s interview that eventually led to the firing of General Stanley McChrystal as Allied commander in Afghanistan. Writer/director David Michôd adapted Hastings’s book, The Operators, an account of McChrystal’s Afghanistan misadventures, for a film that now makes its small screen appearance as War Machine.

The war in Afghanistan was nearing the completion of its first decade without a clear end in sight, and legendary General Glen McMahon (Brad Pitt) AKA the “G-Man” or “The Lion King” takes command of the Allied forces. He is joined by executive officer Cory Staggart (John Magaro) and director of intelligence, West Point classmate, and best buddy Greg Pulver (Anthony Michael Hall). Characterized as a master of systems organization, McMahon is the ultimate warrior who “ate one meal a day, slept four hours, and ran seven miles every morning.” Pete Duckman (Anthony Hayes) is also an intel officer while Admiral Simon Ball (Daniel Betts) manages the public affairs section. Matt Little (Topher Grace) is the General’s civilian PR person. The central cast of characters is completed by young electronics wiz Andy Moon (RJ Cyler) and Willy Dunne (Emory Cohen), McMahon’s “body man” who cared for the fearless leader’s clothes. A continually squinting and gruff-voiced McMahon meets  government representatives Dick Waddle (Nicholas Jones), Pat McKinnon (Alan Ruck), and Ray Canucci (Griffin Dunne) to discuss the Afghan war. Later, the General also sits down with a sniffling President Hamid Karzai (Ben Kingsley) to try to convince him to join a tour of his own country.

McMahon becomes better acquainted with the situation on the ground and the so-called “counter-insurgency,” a strategy that has never worked since you “can’t build a nation at gun point.”  Waddle and a Hillary Clintonesque Secretary of State Edith May (Sian Thomas) deny McMahon’s request for more troops, as they fear that this will interfere with the imminent Afghan election. McMahon “acquires” Afghani aide Badi Basim (Aymen Hamdouchi) to help with the public perception of his campaign. 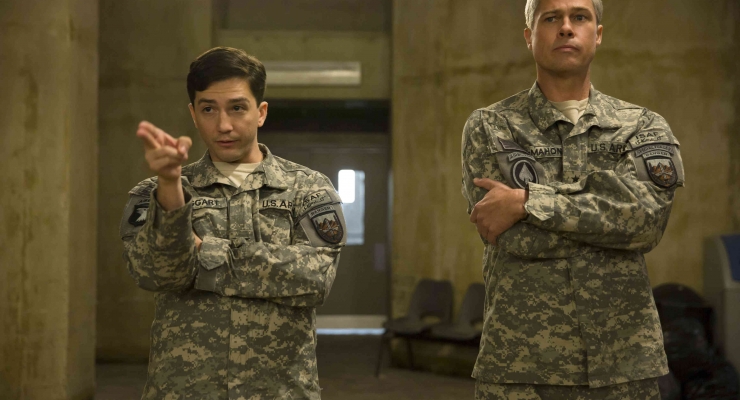 After the General’s bleak Afghan assessment report gets leaked to the Washington Post, he follows the principle that “a good leader leads by a set of rules, a great leader knows when to break them,” and does an ill-advised “60 Minutes” interview with reporter Lydia Cunningham (Georgina Rylance). President Barack Obama makes a public declaration that 30,000 additional troops will be sent to Afghanistan but with a time-date stamp for their departure in 18 months. On a European tour to get more coalition troops, McMahon goes to Paris where he briefly reunites with long-suffering wife Jeannie (Meg Tilly). Instead of getting some promised personal time with the President on Air Force One, the General gets snubbed. One of the very few light moments in this rather ponderous production is the boozy party that the McMahons attend with some of Glen’s men in a Paris bar before they board a rented pink tour bus to meet with the Germans as their military flight approval was denied.

As this torpid tale of military frustration lumbers on, it becomes less clear whether War Machine is a dark satire on armed conflict like Wag the Dog or Catch-22, or simply a muddled mess of a movie. Pitt, so en pointe in Inglorious Basterds, appears befuddled by his one-dimensional character and the lack of direction from an out-of-one’s-element Michôd. The best of the remaining performances are Hall’s anger-driven Pulver, Grace’s sharp publicity agent, and Kingsley’s spot-on impersonation of a puppet president. There are some actual battle sequences when the Marines invade an apparent ghost town but these come too late to save this obviously expensive film that absolutely misses its target. War Machine is a Netflix Original dud that is readily bypassed.