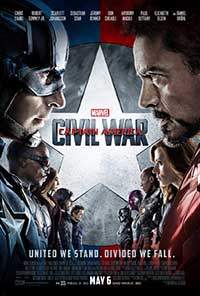 It’s that time again where the giant behemoth and latest installment of the Marvel Cinematic Universe that is Captain America: Civil War gets dropped on the world’s head. In this installment – after the events in Sokovia in last year’s Age of Ultron (and other miscellaneous “superhero” events of the last few years) the United States government along with the United Nations of the world decide that it’s about time that these beings with super powers be cataloged, so that they may be monitored for the safety of the rest of the non-super powered populace. Secretary of State Ross (William Hurt) is spearheading that campaign, with a reluctant Tony Stark (Robert Downey Jr.) by his side.

On this end of the glass we have Steve Rogers aka Captain America (Chris Evans). He’s still out there saving lives and taking names. The problem with he and his teammates tactics are the high levels of collateral damage that tend to overwhelm their various missions. They mean well but the death toll of indirect and possibly negligent action follow the Avengers around. This is why Tony Stark and a few select members of the “new” Avengers team, which include: Black Widow, War Machine, Vision, and now Black Panther. On Captain America’s side we have Falcon, Scarlett Witch, Ant-Man, Hawkeye, Winter Soldier, and special guest star Spiderman. 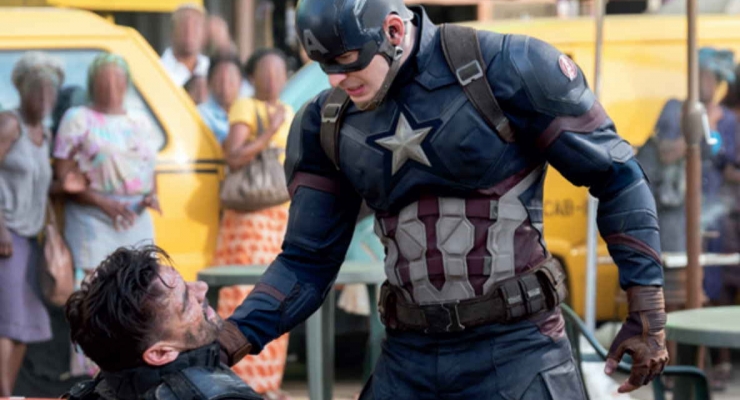 Now what the film sets up in expert fashion is our main villain and red herring expert Helmut Zemo (Daniel Bruhl). Zemo has a master plan that involves framing one of the Avengers as a killer and responsible for terrorist activities thereby facilitating the original law of superhero registration.

Civil War has a lot of things going for it – the first is that it’s a giant, loud spectacle and I loved it just for that. There is amazing and harsh fight choreography that made me feel each bone crunching hit. Then again – it could have just been the sound design. I kid, I kid. I won’t go so far as to say that Civil War is the best MCU film, because there were a few things that took me out of the film and those are more to do with technical issues (like awful digital doubles and certain vehicle cgi) more than with actual content. The film seems grounded only so much in real-world affairs – but they seem somewhat glossed over this time out unlike Winter Soldier. I still reference Three Days of the Condor when I speak of the last Captain America installment. This one, not so much, but it is better than Age of Ultron by leaps and bounds.

The various narrative threads move seamlessly about and the film is so meaty that I don’t believe it has the traditional three-act structure. This had so much going on and yet it remained cohesive and easy to follow. All of the heroes fighting one another, enemy fights, chasing each other, etc., got their allotted time to shine. The editing was great and I was able to catch it in full without having to ask myself what was going on. It definitely was not a choppy film.

The Russo Brothers came in and conquered once more and now they get to go off and prep for the Infinity Gauntlet that is due out in two years or so. As far as Captain America: Civil War goes – it’s still Captain America’s film and the filmmakers did a great job in keeping it and emphasizing that this was not a glorified Avengers sequel-sequel. That is much appreciated.