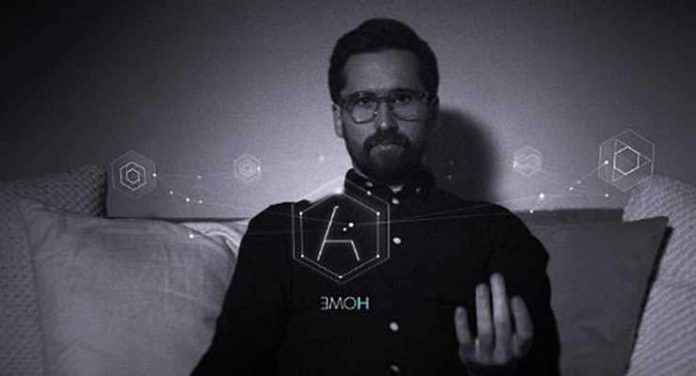 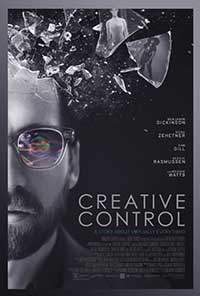 Thanks to Amazon Prime Video, this 2015 black and white indie film, Creative Control is now watchable online. Set in a not-too-distant-future Brooklyn, actor/writer/director Benjamin Dickinson creates a cautionary tale of virtual reality that has just enough of verisimilitude that current audiences could imagine how this story would play out in everyday life.

on the first smoke-able anti-anxiety drug, “Phalinex”, while taking charge of a new campaign for virtual reality glasses that can create the avatar-fantasy adventure of the owner’s choosing. In this case, David is trying to sort out a dysfunctional relationship with lissome yoga instructor Juliette (Nora Zehetner) who is struggling with her own self-worth issues. David becomes infatuated with the sexy blonde Sophie (Alexia Rasmussen) the girl friend of his best friend, fashion photographer Wim (Dan Gill), and sees the VR project, under the label of Augmenta, as a way to have a satisfying (and guilt-free) virtual sexual relationship with Sophie.

But relationships in this film are complicated as David who is a Scotch-swilling/pill-popping obsessive-compulsive freak tries to hold on to his position as creative manager for the Augmenta project with boss Scott (Gavin McInnes) and design a product campaign that will get the buzz going. He engages pop music star Reggie Watts as Augmenta’s product spokesperson and gets some very unexpected results on the promo video. In the meantime, Juliette’s world (and mental health) is collapsing. She

loses her yoga job and finds David perpetually gone at night from their apartment as he continues heavily imbibing and snorting at parties with Wim and reserving hotel rooms for his “rendezvous” with synthetic Sophie. There is an eventual crise de conscience when everything for which David has worked appears to fail and Juliette calls out his personal value system.

Benjamin Dickinson is a relative newcomer to the silver screen and, in many respects, this film is more of a grope than a grab, as it wends its way through multiple layers of millennial angst. Set in a microcosm inhabited by souls that are either lost or who are struggling to find their way, Creative Control tries its best to engage and maintain the viewers’ interest in characters that are less three-dimensional than Sophie’s avatar. The rather trite storyline pits the thrill of material success against less exciting good old-fashioned values. For me, the most interesting thing in this rather vapid 90 minute excursion to a world that I would never considering inhabiting was the selection of some nice classical music pieces that meandered in and out of the cinematic proceedings. Hopefully, when the field of virtual reality matures, it will find better uses for its technology than that of surreptitiously satisfying one man’s jones for another man’s woman.