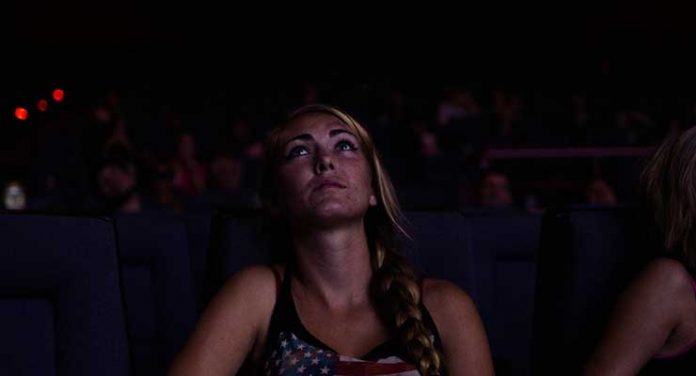 We will eventually discover that Dark Night refers to the title of a film playing at the local Cineplex where terrible things are about to happen. It is also wordplay on the title of the film (The Dark Knight) that was being screened during one of the worst mass shootings in American history. Dark Night opens with the blue-and-red flashing lights of police cars reflecting off the face of a stunned young woman so we already are tipped off that something awful has transpired.  The scene shifts back a few days to the tranquil life of a suburban Florida setting. We watch normal people go about their daily activities like walking dogs, playing with a turtle, taking provocative selfies, swimming in an apartment building pool, skateboarding, attending an Iraq war veterans support group or playing video games. There is obvious foreshadowing at work here. A television newscast shows the ongoing trial of James Holmes, the shooter who wreaked havoc in an Aurora, Colorado movie theater. It is clear that this real-life event was the inspiration on which writer/director Tim Sutton (Pavilion, Memphis) loosely based this, his third film.

A young man (Robert Jumper) is pacing off steps from his car in a shopping center parking lot to what turns out to be a building housing several movie theaters. Completely unnoticed, Robert subsequently walks through his neighborhood, casually toting an assault rifle. Later, he tries on a series of fright masks that he checks out on his bedroom mirror. Watching an Army veteran cleaning his extensive rifle collection provides further hints on things to come. The rather quiet background is suddenly punctuated with sounds of live gunfire at a local target practice range. If all of these hints were not sufficient, Robert visits a friend’s house where a prominently displayed picture of Ronald Reagan (who survived a shooting) implicitly tells viewers that the central theme of Dark Night is going to be that of gun violence in America. 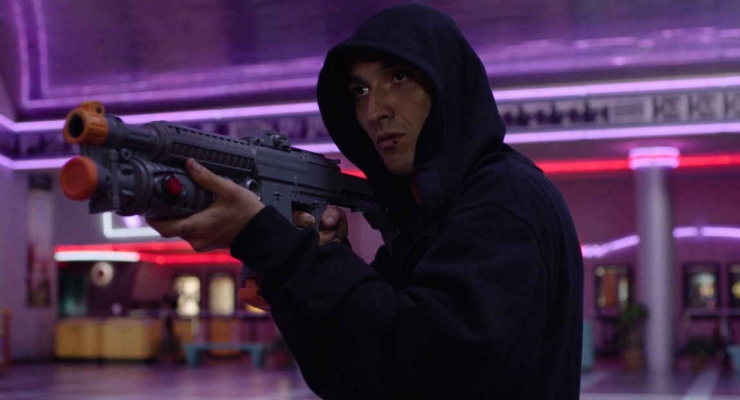 The indie film community has consistently recognized writer/director Sutton and, Dark Night received three best film nominations at international film festivals. Sutton has a knack of taking little known and mostly nonprofessional actors like Robert Jumper, Karina Macias, Aaron Purvis, and Rosie Rodriguez and melding them into an ensemble of true-to-life characters that lend credibility to the events portrayed in this film. Veteran French cinematographer Hélène Louvart gets her cameras to capture the commonplace details of everyday American life, give us a good sense of place, and couch the action in a cinéma-vérité style. Maica Armata is a Canadian singer/songwriter, musician, and actress whose first film score is deliberately low-key and offers little if any indication of what is about to happen. Sutton builds this film’s tension very deliberately and, much to my surprise, it did not entirely provide the finale that I had been anticipating. Gun violence remains a significant problem in our country and although this film does not provide viewers with any solutions, it does highlight the all too frequent problem of disturbed young people who are able to get access to deadly weapons. Avoiding heavy-handedness, Dark Night is one of the better treatments of this subject that I have seen in quite some time.