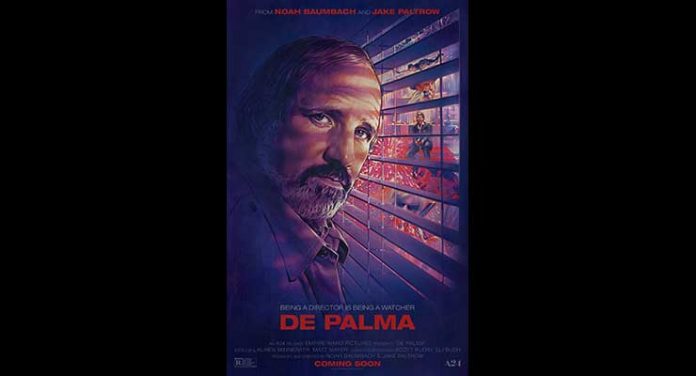 De Palma is the new documentary feature from writer-director Noah Baumbach and Jake Paltrow. As the title states, is about director Brian De Palma. The documentary is a retrospective of the director’s work going back about 50 years. It’s not only a career retrospective highlighting his works – it’s an origin story of sorts directly from the man himself.

Brian De Palma, in some circles, has been often touted as a “modern day” Alfred Hitchcock. Not necessarily in the same league but due to his technical prowess of framing, red herring use, aesthetics, etc. De Palma doesn’t necessarily disagree with the comparison but hopes that his material will stand on its own. He also loves his actresses, women, the female form, etc., which is why he often shoots them the way he does.

It’s interesting to see some of his earliest work and to see an extremely young and full-faced Robert DeNiro in those flicks. De Palma is a chronological retrospective and we through his entire catalog at a brisk pace. I should also warn folks that if you have not seen Brian De Palma’s filmography or are missing a few – there are potential spoilers throughout highlighting the twists and whatnot. Be warned and either mute it or leave the room.

The documentary was written and directed by Noah Baumbach (Frances Ha) and Jake Paltrow (The Young Ones) and it literally has Brian De Palma sitting in a chair for the entire shoot. It’s a one-man-show – there are no other quips or anecdotes featuring any of his actors or collaborators. It’s just De Palma on De Palma. That makes for a neat showcase and if you are a fan of the man’s work, aspiring filmmaker or just a student of film, required viewing. 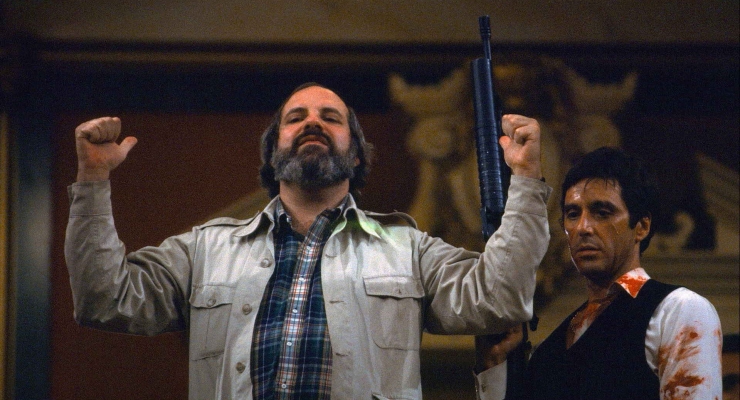 De Palma runs a brisk 107 minutes. I am quite surprised it took this long for a film to be made about his work and accomplishments. Sure, the man has made some duds (who hasn’t) but they’ve at least been gorgeous looking duds. Brian De Palma has always been a director of vision and you can guarantee that even his worst films look terrific. He’s also made some terrific and critically acclaimed blockbusters in his long career. There are some pretty hilarious stories that go along with some of his films. Wait until you hear about what went on during the filming of Casualties of War. That one let out gasps while we were watching it.

The man also speaks candidly about being out of the Hollywood limelight and moving into the independent film circuit due to Hollywood’s politics. He says that Hollywood has not been conducive to auteur filmmakers for a long time and that it is time for new filmmakers to work outside of that antiquated system.

Again, De Palma is a breath of fresh air and I appreciated the director’s candor.

De Palma was released in theaters for a limited run and is currently available for viewing on various streaming and VOD platforms. it will be released on Blu-ray and DVD September 13, 2016.