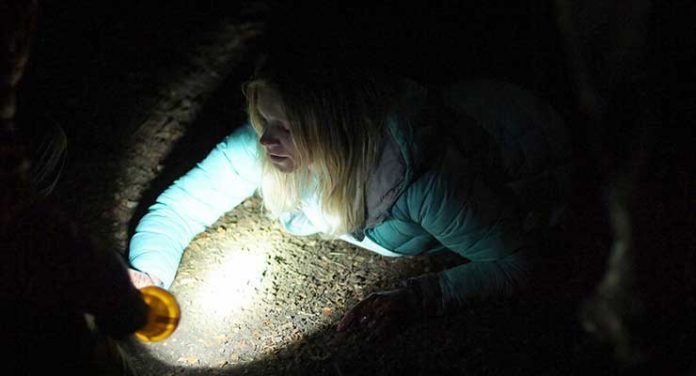 Downhill opens as sexy Stephanie (Natalie Burn, The Expendables 3) and her trail biker boyfriend Joe (Bryce Draper, Bound) are preparing for an extreme bike race in Chile, after receiving an invitation from their friend Pablo (Ariel Levy, The Green Inferno).  Joe is still mourning the death of his buddy Charlie (Eyal Meyer, Blood Sugar Baby) in a biking accident but finally agrees to make the trip. Following an unnerving encounter with three toughs in a Chilean convenience store, the couple meets up with  Pablo and his girlfriend Magdalena (Ignacia Allamand, The Green Inferno).

After a long night of intense partying, Stephanie and Joe take their bikes out for a spin along the mountain trails. When the pair strays off their route, they hear an explosion and discover an injured and apparently infected man (Matias Lopez, The Green Inferno) slumped in his car. Pablo and a paramedic (Yuri Caceres) arrive and the group is attacked by armed men, including the three from the convenience store incident led by the “Alpha Hunter” (Luke Massy, Hidden in the Woods). The friends get separated, and, the hunters murder Pablo and kidnap Magdalena. Joe and Steffy  find dead bodies strewn all over the woods but, with the infected man in tow, gamely manage to make it to Pablo’s cabin. 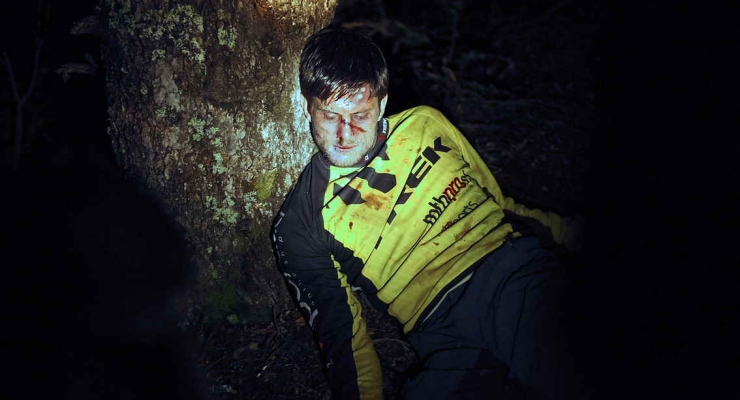 Writer/director Patricio Valladares (Hidden in the Woods) and his co-writer Barry Keating (Nymph) have crafted a script that yields one revolting scene after another, yech for yech’s sake. Mixing in sequences filmed with a GoPro Hero4 Silver and Sony A7S 4K and NEX-VG20E cameras, both fitted with Zeiss compact prime lenses, cinematographer Cristian Ali Venegas (Hidden in the Woods) mixes “point of view” and intense action sequences, much of it filmed on location at Las Termas de Chillan, a Chilean ski resort. The visual effects team led by Juan Pablo Arriagada (Hidden in the Woods) creates some pretty schlocky looking monsters that reminded me of those that populated many of Roger Corman’s 1950s low-budget horror extravaganzas. As for the cast, Natalie Burn seems to have made a career out of a steady stream of B-horror films that have perfected her look of utter shock and her piercing scream. Luke Massy and Bryce Draper are also B-film vets who do their best to cope with the pretty slim material provided to them. Although there is no official MPAA rating available for Downhill ,(its slated UK home video release gets an 18 certificate)  this film will not be suitable for squeamish or faint-hearted viewers. Avoid this made-in-Chile flick, and, instead, quietly savor a Pisco Sour in the comfort of your own home.