As Fifty Shades Darker ended, Christian had just proposed marriage to Ana but looming in the darkness is the evil Jack Hyde (Eric Johnson). Hyde, the former editor at Grey’s publishing company, got fired for making improper advances on Ana and he will play a substantial role in driving this lightweight story to its conclusion. Freed opens with the big wedding ceremony and things look rosy for the newlyweds as they begin their honeymoon in Paris. Back on the home front, there is an act of sabotage in the Grey Enterprises cyber center by none other than—Jack Hyde. When the honeymooners abruptly return home, Christian gets Ana a security team, Prescott (Kirsten Alter) and Sawyer (Brant Daugherty) and a stunning old mansion in the woods outside of Seattle. Against Christian’s express orders, Ana goes to a bar with her best friend Kate Kavanagh (Eloise Mumford), Elliot Grey’s (Luke Grimes) girl friend and eventual fiancée. Returning to her apartment, Ana finds–you guessed it– Hyde waiting to abduct her only to be foiled when the security team springs into action and subdues him until he is arrested and jailed.

As the second act of Fifty Shades Freed begins, Ana discovers that she is pregnant but when she breaks this news to Christian, his response is less than ecstatic since he wants to be the most important person in her life. Christian stomps out of the apartment, goes on a drinking spree, and, on his staggering return, unwisely tells Ana that he had a “meeting” with his former mistress Elena Lincoln. Jack will not go away quietly and after he makes bail, there are dangerous plots ahead that will not only test Anastasia and Christian’s marriage but also pose a threat to another member of the Grey family, sister Mia (Rita Ora). Is there a happy ever after for the young Greys? If you can’t figure this one out before the final credits roll then either you have not been paying attention or, perhaps, like most of the men in the theater where I was sitting, you have already fallen asleep. 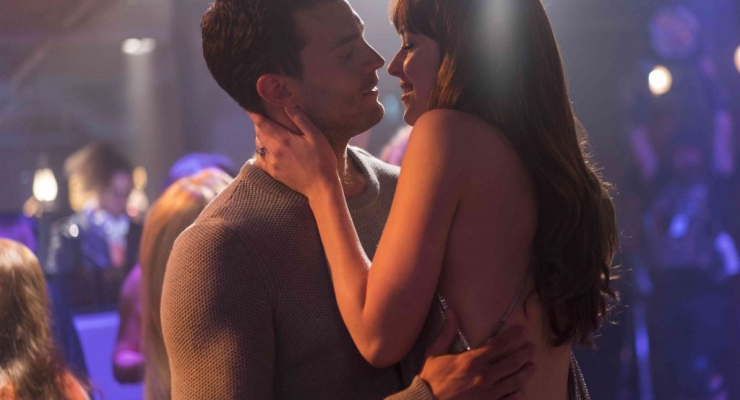 JAMIE DORNAN and DAKOTA JOHNSON return as Christian Grey and Anastasia Steele in "Fifty Shades Freed," the climactic chapter based on the worldwide bestselling "Fifty Shades" phenomenon. Bringing to a shocking conclusion events set in motion in 2015 and 2017's blockbuster films that grossed almost $950 million globally, the film arrives for Valentine's Day 2018.
20 Photos

In contrast to the previous Fifty Shades films, there is less raunchy sex and only a smattering of BDSM in Fifty Shades Freed. Frankly, this was fine with me since one of my criticisms of the earlier movies was the extensive use of these devices to bolster skimpy storylines and paltry dialogue (when it occurred). As for character development, that was mostly taken care of in Fifty Shades Darker so do not expect any new ground to be broken here. Although noticeably shorter than the earlier films, this one seemed to run forever and ends not with a bang but with a whimper. None of these issues will keep the Fifty Shades fans from moving through the turnstiles in huge numbers, but I was left with the ho-hum feeling that I will never get these two hours back. Barring any film adaptations of the next two E.L. James novels, I think that we will be “freed” from further adventures in the “red room,” but given the big weekend box office for this movie, who knows?