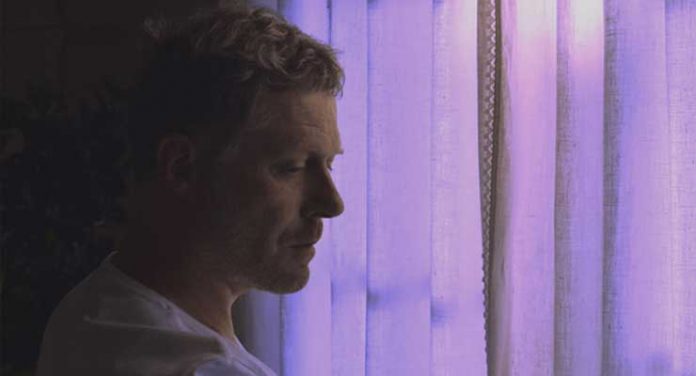 The title of this Norwegian-American film, Gavagai, comes from a term in an imaginary language created by noted 20thcentury American philosopher William van Orman Quine that defies literal translation and is the perfect paradigm for the existential film that follows. A German businessman Carsten Neuer (Andreas Lust) goes to Norway and connects with wildlife tour guide Niko (Mikkel Gaup) to help him visit Vinje, the hometown of the late Norwegian poet and novelist, Tarjei Vesaas.  Neuer has recently lost his wife who was translating Vesaas’s poems into Chinese and he intends to complete her project.

After Niko takes him to the Norwegian wilderness, Carsten finds a spot that connects him with the natural surroundings that must have influenced Vesaas’s writing and, sitting on a large boulder, he opens his wife’s notebook to where her translations ended. A wordless woman (Anni-Kristina Juuso), clad in  a traditional Chinese costume with whiteface makeup appears: it is the spirit of  Karsten’s late wife. The next day, before Carsten leaves for Vinje, the same ghost briefly joins him in his sparsely decorated room in the local inn. Carsten is still in mourning and is taking antidepressants to help him cope with his emotional pain. Niko is having his own issues, as his girlfriend Mari (also played by Anni-Kristina Juuso) is pregnant but he hesitates to marry her.

The two men begin to develop an “odd couple” road trip relationship: Carsten is a cultured art lover while Niko is a concrete down-to-earther.  As their journey continues, Niko grows up emotionally and begins to understand how important it is to express his true feelings for Mari to whom he proposes and she accepts. 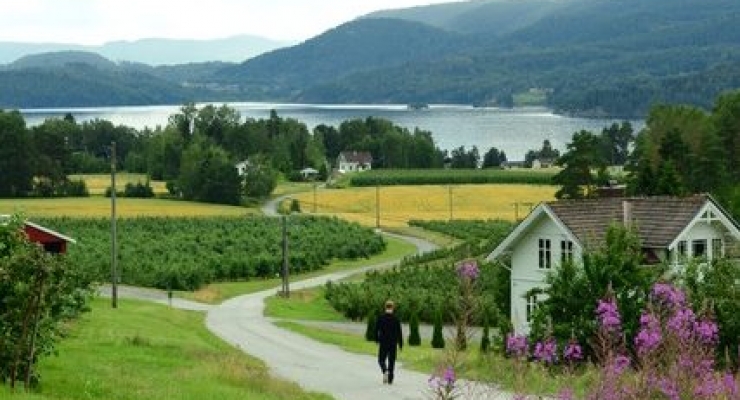 There is a pivotal moment when Carsten takes the urn containing his wife’s ashes. As he stands on a lonely bluff, during a persistent grey downpour, Carsten caresses the vessel in a profound soul-wrenching moment before emptying its contents on the stony ground beneath his feet. In a final gesture of futility, the widower throws away pages from his wife’s notebook knowing that he cannot complete her work. As somber as much of Gavagai’s mood has been, the film concludes on an upbeat life-affirming note, celebrating Niko and Mari’s engagement and Carsten begins a solitary journey, walking down a literal long and winding road to begin his personal recovery.

Writer Kirk Kjeldsen and co-writer/director Rob Tregenza have woven fifteen of Vesaas’s poems into the fabric of this story that perfectly parallel the journey taken by two people through different phases of their lives. Gavagai is an impressionistic film that, at times, resembles a painting as Tregenza’s cameras work like paintbrushes, often using light and shadow in an “Old Masters” manner, exemplified by the scene in the lodge’s sauna where the female spirit joins Carsten. Viewers are also treated to some great panoramic shots of the unspoiled Norwegian countryside. I have seen few recent films of any provenance that, in a brief ninety minutes, probe so deeply into the essence of the human soul with an economy of expression where words are subordinated to images. In recalling the poetry that closes the highly acclaimed film, The Shape of Water, the message delivered here as well is that, in life, there are meaningful relationships that defy translation because they are felt rather than capable of being defined by words. Gavagai is a shining example of creative brilliance and absolutely must be seen. Highest recommendation.

4.5 / 5 TheaterByte Rating
{{ reviewsOverall }} / 5 Users (0 votes)
Gestell Motion Picture Company | Lichgtbogen Filmproduktion | Proper Film | Shadow DistributionStudios & Distributors
Norway | USACountry
English | Norwegian | GermanLanguage
90 Mins.Run Time
2.35:1Aspect Ratio
Rob TregenzaDirector
Rob Tregenza | Kirk KjeldsenWriter
3 Aug. 2018 (NY)Release Date
The Film
Summary
A German businessman travels to Norway to finish a complicated translation project of his late wife's and there he finds an unexpected romance. An incredibly moving film that tracks two men who are coming to terms with different parts of their lives and one that uses images rather than dialog to convey a message of the wordless essence of human relationships.
What people say... Login to rate
Order by: