The big guy is back in the latest Japanese produced film featuring the giant monster with atomic breath. This time he is brought to life via the means of anime. Godzilla: Planet of the Monsters is the new film featuring Godzilla in a new circumstance.

In the tail-end of the 20th century monsters began appearing all over the world laying ravage down on humanity. Out of this chaos Godzilla rose up to destroy them. In doing so Godzilla also destroyed much of the world including most of humanity. Humanity was on the brink of extinction until two humanoid alien species arrived on Earth to offer a bargain and truce with the remaining humans. The alien races known, Exif and Bilusaludo, sought to help mankind if they converted to their religion. After failing to activate Mecha Godzilla there was no choice but to leave Earth for good.

If the plot sounds a bit convoluted that’s because it is. I can tell you that the humans, Exif, and Bilusaludo are the least interesting aspects of the film. They basically travel away from Earth and see that there the new planet is not fit for them and decide to come back to Earth – by basically jumping thousands of years into the future. This theory assumes that Godzilla will probably be dead by then and they can repopulate the planet. Let’s just say that it does not go as planned.

Godzilla: Planet of the Monsters is an anime film of the highest caliber in terms of the artwork. I am a big fan of more mature anime and anime style than what is typically found out there. Watching this version of the monster was cool in that the style is reminiscent of Tim Bradstreet’s artwork but in anime (with CGI flourishes). It really stood out to me. 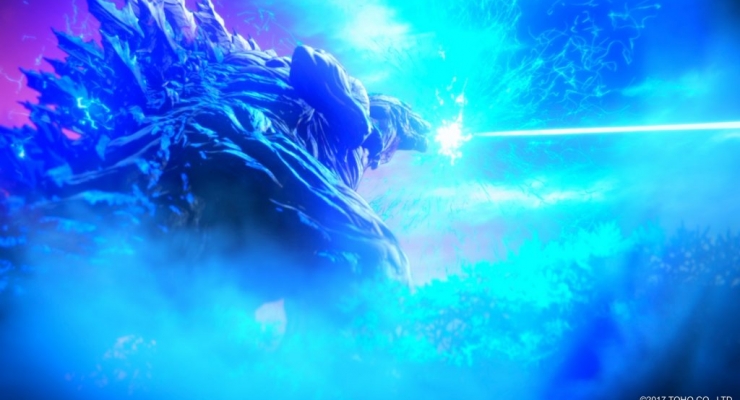 In addition to Godzilla: Planet of the Monsters being an okay time-waster – I am sure that more plot holes will eventually get filled in due to the fact that this is just part one of a trilogy. The second part of this trilogy is due to be released in May of 2018. The peculiar title for that chapter is called Godzilla: Battle Mobile Breeding City.

As far as watching the best version of the Planet of the Monsters that you can – I would say that the Japanese 5.1 track, with English subtitles is your best bet. I have seen the film twice and all things considered, the English dub is not all that bad, but when you have the original track and in 5.1 no less, there’s no reason not to go with it.

Godzilla: Planet of the Monsters is a good enough starting point for this new iteration of the character. It’s cool to know that we will be getting two more films to finish of this giant story arc.

Godzilla: Planet of the Monsters Part 1 is streaming now on Netflix and is available in Ultra HD 4K and HDR formats (HDR10 and Dolby Vision).

Godzilla: Planet of the Monsters Part 1 (TheaterByte Movie Review)
3.5 / 5 TheaterByte Rating
{{ reviewsOverall }} / 5 User Rating (0 votes)
Polygon Pictures | Toho CompanyAnimation Studio
Toho Company | Vision Film | NetflixDistributor
Seshita Hiroyuki | Shizuno KôbunDirector
Urobuchi Gen (original story) | Murai Sadayuki | Kozaki YusukeWriter
89 Mins.Run Time
17 Jan. 2018Release Date
1.78:1Aspect Ratio
English Japanese | Simplified Chinese | Spanish | Traditional ChineseSubtitles
TV-14Rating Certificate
The Story
The Animation
The Dub
Summary
In the distant future the planet has been taken over by monsters ruled by the king of monsters himself, Godzilla. When humans' plans to abandon the planet fail, they must fight back to defeat Godzilla. Godzilla: Planet of the Monsters Part 1 is an entertaining anime feature that, once you get past its drama with the humanoids, provides thrilling action. It is a high quality anime production with two more films planned in the trilogy.
What people say... Login to rate
Order by: