The Howard brothers, Tanner (Ben Foster, Lone Survivor) and Toby (Chris Pine, The Finest Hours) are on a frantic mission to prevent the foreclosure of their family’s ranch due to their late mother’s “reverse mortgage” debt. Adding to the urgency of their situation is the recent discovery of enough oil on the property to set them up for life. Tanner is a mentally unstable career criminal and has spent much of his life behind bars while Toby, a divorced father of two young boys, calmly plans a series of bank heists. The pair intends to rob numerous branches of the Texas Midlands Bank that holds the mortgage note on the ranch. There are only a few days remaining before Midlands Bank will takes possession the Howards’ property so Toby designs a series of capers with each brother in disguise and driving different stolen cars. The unusual aspect of their bank jobs is that they rarely take large sums but just what is in the tellers’ tills until they finally accumulate enough money to pay off the bank. Tanner and Toby visit an Indian casino in Oklahoma and proceed to get their loot laundered in the form of gambling chips that are then cashed in and converted to an untraceable check made out to Midlands Bank.

Their crime spree gets the attention of nearly retired Texas Ranger Marcus Hamilton (Jeff Bridges, True Grit) and his partner Alberto Parker (Gil Birmingham, The Lone Ranger). They decide to track down the Howard brothers who prove surprisingly elusive. Although the Howards have become incredibly successful bank robbers over a very brief period of time, they make an ill-advised decision to take on one more bank job that will put them over the top, keep the ranch in the family and provide for Toby’s children in perpetuity. As their last robbery plays out in most dramatic fashion, it appears that law and order might finally prevail but there are some more plot twists in store. 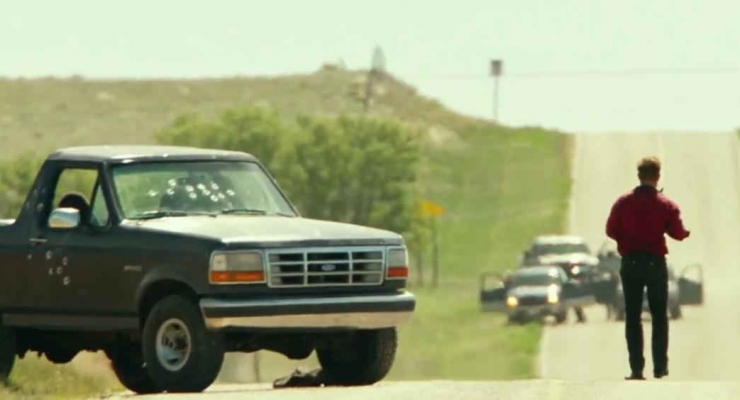 Director David Mackenzie (Perfect Sense) has taken Taylor Sheridan’s (Sicario) tension-packed script and provides us with a classic Western crime drama much in the spirit of Clint Eastwood’s The Outlaw Josey Wales or the more contemporary Thunderbolt and Lightfoot (Eastwood again with a young Jeff Bridges). The film is propelled by the running exchanges between Foster, the unhinged and careless misfit, and Pine’s more solid citizen type who feels responsible for ensuring the financial future of his children Justin (John-Paul Howard) and Randy (Christopher W. Garcia). Jeff Bridges who received one of the film’s four Oscar nominations for Best Supporting Actor (the others being for Best Picture, Best Original Screenplay, and Best Film Editing) has morphed his “True Grit” persona into the curmudgeon who could have marked his time and gotten his gold watch but instead goes back into the field and risks his life to solve his last case. Uttering periodic racial slurs and swilling Shiner Bock beer, Bridges delivers yet another memorable character that carries the scenes in which he appears.

The wide-open, dusty and often barren spaces of the Texas landscape (actually filmed in New Mexico) receive superb visual treatment by Giles Nuttgens’s cinematography while veteran Australian rocker Nick Cave and his fellow band mate Warren Ellis contribute an evocative score with C&W overtones. While Hell or High Water mostly adopts a tried-and-true formula for the venerable Wild West bank robbery films, there are enough 21st century nuances to make its story relevant to our times. The deliberate ambiguity of the film’s conclusion is in keeping with the modern style of crime filmmaking in which not everything is neatly tidied up when the cameras stop rolling. Highly recommended.