Human Lost is a cyberpunk action/thriller anime from production house Polygon Pictures and chief director Motohiro Katsuyuki (Psycho-Pass). The story in the film is very loosely based on the autobiographical short novel by Dazai Osamu, No Longer Human. Whereas Dazai’s novel is a look at the torturous experiences of life through a series of memoranda following the exploits of the character Oba, this anime film turns the story into a futuristic and ironic dystopia where humanity has conquered death through an organization named S.H.E.L.L. and their amazing technology that links everyone biologically to a network that can instantly cure injuries and ailments and even revive them from death using nanomachines – but it comes at a hidden cost.

It is set in 2036, and Oba Yozo, one of the less wealthy members of society, joins his friend’s motorcycle gang who tries to break into “the inside” where the elites live. But their attempted break-in leads to an unexpected unleashing of something inside Oba –the so-called “human lost” phenomenon where some people are unable to connect to S.H.E.L.L and turn into monstrous creatures that need to be killed —  that leads to a truth about humanity and the extension of life expectancy. To many people’s amazement, Oba is able to bring himself back from the transformation and return to normal. One woman from S.H.E.L.L., Hiiragi Yoshiko, seems to hold the key to helping Oba discover his true purpose and also to protect him from forces that want to use him for nefarious reasons. 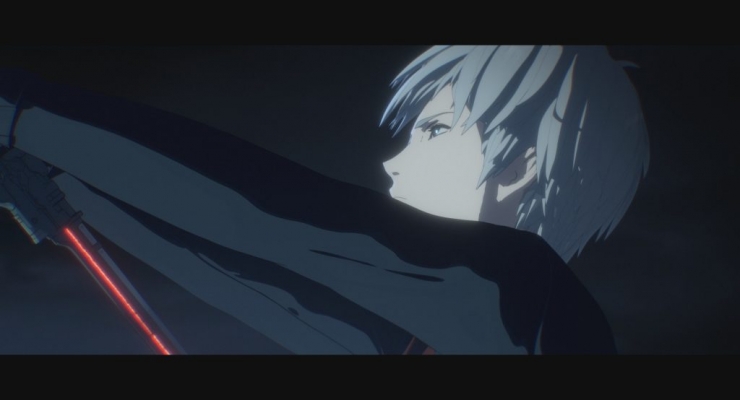 Like many of the anime films and series from Polygon Pictures (Blame!, Godzilla), this 3D production looks gorgeous if you like the sort of motion capture look of the character designs, but beyond that the CGI work of the backgrounds is beautiful, the detail in the action sequences is nearly psychedelic. There’s one point in the motorcycle chase scene as Oba and his friends try to break-in to “the Inside” where the portrayal of kinetic energy, the explosions and the metamorphosis of certain characters is so eye-catching and hyperactive it’s nearly surreal and very invigorating.

Those are the strengths of Human Lost and when it sticks to those elements, it’s a winner. Unfortunately, its story, in which I truly strain to find any connection to its original source material other than character names – struggles to stay coherent. It begins as a promising and intelligent cyberpunk sci-fi film examining the meaning of life and what it means to be human in a world where death itself is no longer an obstacle, but it very quickly devolves into a difficult to follow action flick. Unlike Ghost in the Shell or even Psycho-Pass that both manage to delve into the philosophical issues at the center of their stories, this one skirts them most of the time and instead goes for the easy sell – a big showdown, a monster, a surprise twist. It looks and sounds great, but it all ends feeling a little shallow.

I screened the original Japanese version of the film with English dubs, so I cannot comment on the English dubbed version.

3.8 / 5 TheaterByte Rating
{{ reviewsOverall }} / 5 User Rating (0 votes)
Polygon PicturesAnimation Studio
TOHO Visual Entertainment | Funimation Entertainment | NetflixDistributor
Motohiro Katsuyuki (Chief Director) | Kizaki Fuminori (Director)Director
Ubukata Tow (script) | Dazai Osamu (Based on the novel 'No Longer Human' by)Writer
112 Mins.Run Time
22 October 2019Release Date
1.78:1Aspect Ratio
EnglishSubtitles
The Story
The Animation
Summary
In this cyberpunk anime film loosely based on the Dazai Osamu novel No Longer Human, it's Tokyo, 2036 (Showa year 111) and science has conquered death through amazing nanotechnology called S.H.E.L.L., but Oba Youzou, one of the less fortunate members of society, is about to find out that the cost of that may be too high.
What people say... Login to rate
Order by: