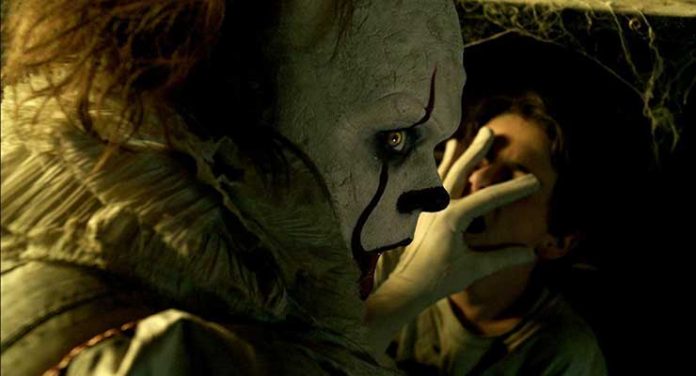 It (2017) is the latest Stephen King adaptation or reboot. This review comes to you a little late, and as of this writing, It has made over $500,000,000 worldwide. It has dethroned The Exorcist (not counting for inflation) and is the most successful rated R horror film of all time and it’s only been in theater for three weeks or so.

The film loses the timeline of the book and the previously aired television miniseries of the early 90’s that starred Tim Curry as the evil Pennywise. Pennywise the clown is played by Bill Skarsgård in Andy Muschietti’s (Mama) film. Leading “The Losers” in this version of the film is that of Finn Wolfhard (Stranger Things), who plays Richie. The young cast more than hold their own in the cursed town of Derry. I would have to say that Sophia Lillis as Beverly cements herself as one of the most exciting actresses to have come along in a long time. Without putting down the rest of the boys, she steals the show embodying strength and just plain “kickassdom” in the face of adversity. Believe me, Derry and the entire band of kids that make up The Losers aren’t necessarily living a kid’s life. They are constantly bullied and their parents are manipulative and indifferent to their plight. Oh, and there’s an evil clown in there, too.

Pennywise, the scary as hell clown from who knows where, kills children in the most horrific ways imaginable and the film does not turn away from it. It’s a rated R for a very good reason, so be warned. Bill Skarsgård is creepy as Mr. Pennywise and I cannot say that I am familiar with his work even though I am familiar with Alexander and their father Stellan Skarsgård. To say that Bill hits it out of the ballpark would be an understatement. 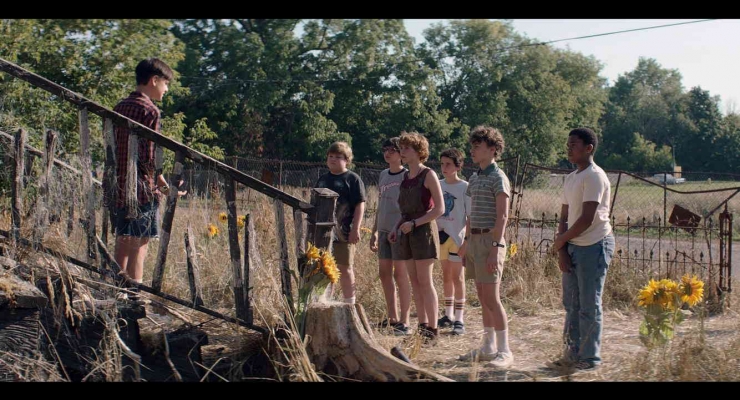 I think the scenes of the kids coming together as one to defend themselves against the evil are terrific, because it’s almost played as if it were taking place in the real world of today. The town of Derry feels so disconnected and insulated by what goes on there that it makes it that much harder for the kids to stand on their own two feet. They’ve got killer clowns on the right and indifference to the left. Also, that the film takes place in 1989 made for some major differences from the book. I think the story starts in the 1950’s there.

Director Andy Muschietti has made a Gothic masterpiece that — as violent and profanity-laced as it is — hits the perfect notes in terms of tone. The production design and creature designs are spot on and the film only cost $35,000,000 to make. I have not read the novel bit I did like parts of the original mini-series and thought Tim Curry’s portrayal was great. There is obviously more story to tell in this new version that the studio has already set aside September 6, 2019 as the release date for “Chapter 2.”

Now, I may have stated that It (2017) is a modern Gothic masterpiece, but why not a 5-star as opposed to a 4-star? Well, the film isn’t necessarily “the end” of the story it aims to tell. Sure, if you hated the material then by all means, you’re done. For those that know it continues, we know it cannot be judged as whole until Chapter 2 is released. Maybe in a couple of years when the next chapter hits I will come back and give it another whirl and see if it becomes a classic. I would also say that the film does fall into the category of being typical of a horror film today, employing jump scares and loud musical cues that may or may not lead anywhere.

The big question is — should you see It (2017) in theaters? A couple of weeks ago it was announced by Andy and his producer sister Barbara Muschietti that the Blu-ray release of It would have 15 more minutes of footage restored bringing the total cut of the film to 150 minutes. The theatrical version runs 135 minutes. That’s something else to look forward to.

4 / 5 TheaterByte Rating
Warner Bros. | New Line CinemaStudios & Distributors
R (for violence/horror, bloody images, and for language)Rating Certificate
USACountry
EnglishLanguage
135 Mins.Run Time
2.35:1Aspect Ratio
Andy MuschiettiDirector
Chase Palmer | Cary Fukunaga | Gary DaubermanWriter
8 Sep. 2017Release Date
The Film
Summary
It is an entertaining horror romp, but for those that are sensitive to violence towards children - be warned - it is extremely violent. The film is rated R. I enjoyed the film and am anxiously awaiting the Blu-ray director's cut.