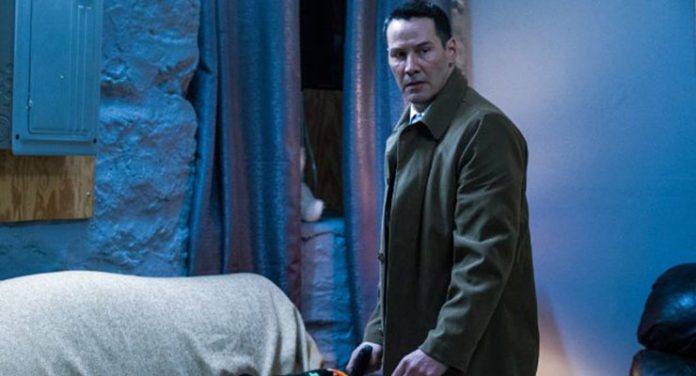 Reeves is Detective Scotty Galban who discovers that his former (and dead) police partner Detective Joel Cullen (Danny Hoch) was not the clean cop he was supposed to be. Cullen was a sodomite, a rapist, and in cahoots with several criminals in town. And Galban’s boss, Lieutenant Elway (Christopher McDonald) prefers not to have Cullen’s death investigated. You see, he was found in a subway station, with a stab wound in his back, and left for dead. Elway wants to close the murder investigation for the sake of Cullen’s wife Janine (Mira Sorvino) and his children for they stand to lose his pension if Galban continues the investigation and uncovers Cullen’s dirty doings. But Galban, of course, has demons of his own. His wife has died and his young son lives in Florida, for reasons not explained in the film. Meanwhile, Latina Isabel de la Cruz (Ana de Armas) might have been witness to the killing. She’s a young woman on her own mysterious 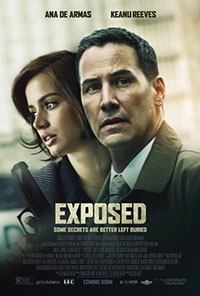 journey. Her husband is in Iraq, and while she lives with his family, she’s seeing white ghosts appear out of nowhere. They are paranormal visions they might unlock some sort of secret in her life. Meanwhile her fiance’s younger brother Rocky (Gabe Vargas) is hanging around with the wrong crowd, led by Big Daddy Kane who is simply known around the hood as Black. And while Galban continues to investigate his partner’s murder against the wishes of the lieutenant, Isabel is on her own journey, while at the same time helping out a local girl who’s being abused, it’s a journey that takes her into a world that is strange and confusing, just like this movie.

Exposed has nothing to expose. It’s a title that doesn’t have anything to do with the movie. The film’s original title was going to be Daughter of God, but it was re-cut after its distributor Lionsgate bought it to make it more of a cop thriller than a dark sadistic film. It’s original producer and director, Gee Malik Linton, had his name removed from the film’s credits (but is credited as a writer), so the non-existent Declan Dale is credited as director. Lionsgate looks like they have tried to salvage something from their original purchase by chopping up Linton’s original unfinished film, but it’s a right confusing mess. What we have are two stories trying to merge into one movie, with Isabel’s storyline more compelling than Galban’s. It’s got some good ideas going, with some great acting by some of the cast (but not Reeves), but at its best it’s a bit convoluted and confusing. 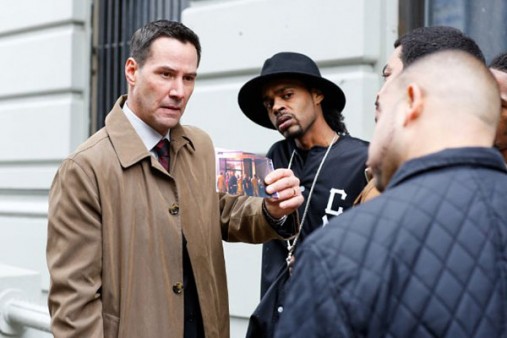 Exposed now available to watch in cinemas and On Demand. Out on Blu-ray and DVD March 29, 2016