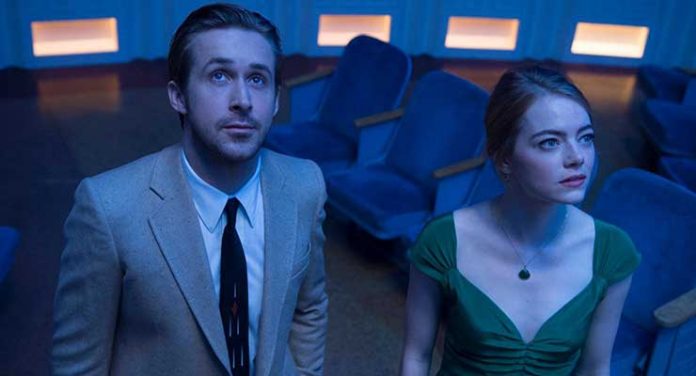 Writer/Director Damien Chazelle (Whiplash) reaches way back to the big budget Hollywood musical playbook for La La Land, ostensibly a song-and-dance show that pays homage to Los Angeles where this film was shot. Chazelle was clearly influenced by the old Gene Kelly and Jacques Demy films, mixing large production numbers like the opening freeway dance sequence with an intimate pas de deux that has Emma Stone and Ryan Gosling literally dancing with the stars.  In the time-honored musical tradition, there are the occasional “break into song” moments with numbers by composer Justin Hurwitz (Whiplash) and lyricists, Benj Pasek and Justin Paul.

La La Land, like the venerable films that it tries to emulate, has a very basic romantic storyline. Mia (Stone, Birdman) is a 20-something struggling actress, working as a barista in a  film lot coffee shop. Sebastian (Gosling, The Big Short) is a down-at-the-heels jazz pianist, recently fired from his bar-lounge job by owner-manager Bill (J.K. Simmons, Whiplash, in a cameo role). Mia dreams of becoming a successful film star while Sebastian aspires to own a jazz club where he can play the music that he loves. When they meet at a party, Seb invites Mia to see Rebel Without A Cause for “research purposes,” but  she has a dinner commitment with not-very-exciting boyfriend Greg (Finn Wittrock, American Horror Story). When her dinner date goes downhill, Mia abruptly walks out to meet Sebastian in the movie theater, and after the film projector fails,  the pair takes off for the Griffith Observatory, conveniently opened and deserted, where the real sparks begin to fly.

Mia’s auditions continue to fail, so she decides to write her own one-woman autobiographical play.  Sebastian gets a recording and touring gig with high-school friend Keith (John Legend) and his band, The Messengers. Mia moves in with Sebastian but his endless road trips strain their relationship to the breaking point, and, although they pledge “eternal” love, the couple parts to pursue their individual dreams. The wistful ending is bittersweet, as the romantic flames stoked in the first half of the film are eventually doused by each character’s intense drive for professional success. 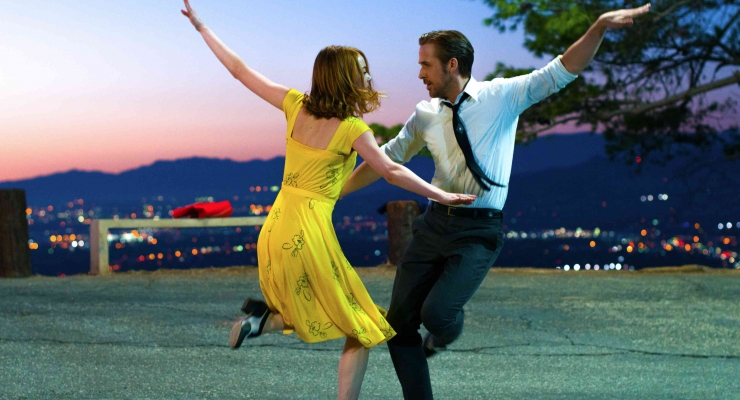 This is the first original Hollywood musical in years, a genre that was  wildly successful a half-century ago but one that has been largely ignored by today’s studios. Linus Sandgren’s (American Hustle) brilliant cinematography provides eye-popping colors and occasional vistas of LA that contrast with the intimate moments between the starring couple. And this is the best news going for a film that received a record seven Golden Globe Awards.

At the risk of sounding like a contrarian and  in spite of its considerable  ballyhoo, La La Land has  some noteworthy shortcomings.  I was not previously aware that either Stone or Gosling could sing or dance, and, after giving each actor the benefit of the doubt, these performances never come anywhere near the movie musical standards set by iconic singing-hoofers like Singin’ In The Rain’s Gene Kelly or Debbie Reynolds. While both actors spent plenty of time in the rehearsal studio, their dance routines feature fairly fundamental footwork, ultimately more cautious than thrilling. The same could be said about their dull vocals, in sharp contrast to those delivered by John Legend, a truly gifted singer. More convincing is Gosling’s tickling the ivories (he can play the piano). I also have issues with the “dual” ending that gratuitously conflates “what might have been” with “what actually happened.” Stone’s persona seems  frequently on the verge of tears, while Gosling responds with a character whose expressions of ennui wear thin over the two-hour running time. All of that said, La La Land still offers a modicum of entertainment,  but would have benefited from leads that were more accomplished singers and dancers, and a peppier pace. This film’s generally warm critical reception and box office success raise hopes that this venerable Hollywood cinematic genre will enjoy a 21st-century renaissance. My much less sanguine perspective is that a millennial audience, unfamiliar with the magical musicals of yesteryear, will be more apt to accept specious form over solid substance.