Mamma Mia! Here We Go Again is both a prequel that reveals Donna and Sophie’s backstory and a sequel that is set in the present time. When was the last time you actually had fun watching a motion picture on the big screen? Cutting to the chase and revealing my hand well before the game even starts, if it takes you more than a second or two to answer this question, then it is high time that you hustled over to your local movie theater and watched the latest installment in the Mamma Mia! franchise!

It has been ten years since the curtain came down on the original film. Innkeeper Donna Sheridan (Meryl Streep) and Sam Carmichael (Pierce Brosnan), one of three candidates for the father of daughter Sophie (Amanda Seyfried), had just tied the knot, while Sophie and her fiancé Sky (Dominic Cooper) nixed their nuptials to travel the world instead.

Donna died the year before this film opens, and Sophie has engineered, with the help of hotel manager Fernando Cienfuegos (Andy Garcia) and Sam, the complete makeover of the Villa Bella Donna on the island of Kalokairi. Sophie’s boyfriend Sky (Dominic Cooper) is working in New York and has become uncertain about returning to her. Taking her usual initiative, Sophie  invites her other “dads,” banker Harry Bright (Colin Firth) and travel writer Bill Anderson (Stellan Skarsgard), and Donna’s best friends, over sexed divorcee Tanya Chesham-Leigh (Christine Baranski) and author Rosie Mulligan (Julie Walters) to the hotel’s opening gala.

In one of numerous flashbacks, a young Donna (Lily James), Tanya (Jessica Keenan Wynn), and Rosie (Alexa Davies), all recent Oxford graduates, are about to go their separate ways. Donna flies to Paris where she has a one-nighter with Harry (Hugh Skinner) before arriving at the dilapidated farmhouse in Kalokairi via Bill’s (Josh Dylan) sailboat.  She encounters (and beds) Sam (Jeremy Irvine), a handsome young man who is enjoying a final breath of freedom before returning home to a fiancée that he does not really love. And yes, we see the aftermath of the sexual encounters that might have produced baby Sophie. 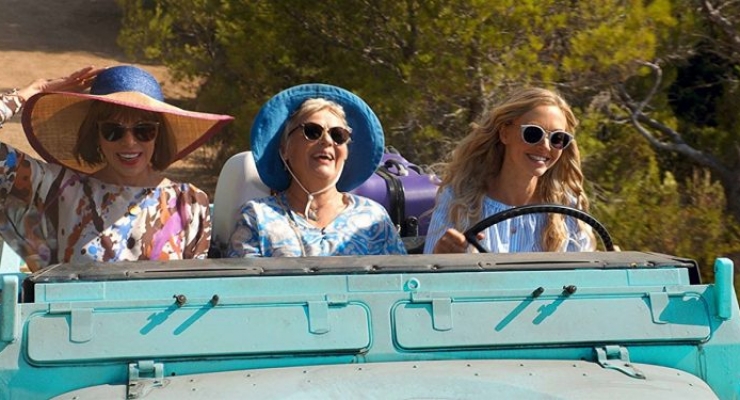 The parallel stories, both past and present, feature rekindled love affairs, Donna’s road to self-discovery that repeats itself with Sophie’s newly revealed pregnancy, and a final scene that will surely moisten the collective eyes of the audience.  There are some bumps along the road before the hotel’s big event but, in true movie musical fashion, they are all eventually overcome.

Just when I felt that the original Mamma Mia! and its earworm-laden ABBA playlist was the definitive silver screen version of a monster jukebox musical, I found that this new release was even better.  The flashbacks neatly segue into the present-day scenes and add a whole layer of interest that was missing in the first film that merely hinted at the past.  Bringing back most of the original cast (and yes, Meryl Streep fans, there is a “beyond-the-grave” cameo by this “super trouper”) virtually ensured a successful return to the Greek islands (in this case, the Croatian seacoast).  While Lily James absolutely nails the role of the strong young rebel who goes it alone during her  pregnancy, the real scene-stealer is the ageless chanteuse Cher as Sophie’s estranged and uninvited grandmother who just happens to be–a pop star. Adding local characters like the Greek customs officer (Omid Djalili) who critiques the characters’ appearances, and the judgmental but kind-hearted Kalokairi farmhouse owner Sofia (Maria Vacratsis) brings additional spice to an already tasty cinematic stew.

The musical direction, choreography, cinematography, and writer-director Ol Parker’s script and behind-the-camera work are all topnotch. If you thought that the fantasy ending of the original film was over-the-top, well, you ain’t seen nothin’ until you take in the end credits extravaganza of Mamma Mia! Here We Go Again. I will definitely see this one again and guarantee that many audience members will do the same.  Highly recommended.