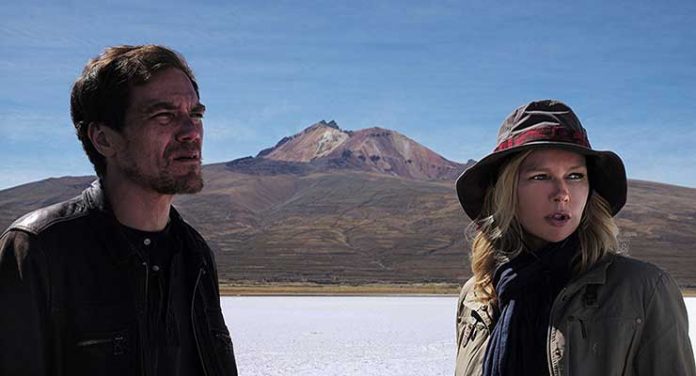 Dr. Laura Sommerfeld (Veronica Ferres) is a United Nations-sponsored German ecologist sent to investigate an apparent environmental disaster in the Bolivian salt fields, Salar de Unuyi. She is accompanied by pesky Dr. Fabio Cania (Gael Garcia Bernal) and diminutive Dr. Arnold Meier (Volker Michalowski). The scientists are greeted by wheelchair-bound Aristidis (Lawrence Krauss) and board a private jet only to be taken hostage and blindfolded by a group of armed masked men who drive them to a gated compound. Drs. Cania and Meier suffer recurring bouts of “la turista” AKA “tourist trots” and, mercifully,  completely disappear from this film.

The leader of the kidnappers, Matt Riley (Michael Shannon) is the CEO of a large unnamed “consortium” that was involved with the“Diablo Blanco” (White Devil) ecological catastrophe. We are eventually supposed to believe that the rapidly expanding salt flats are  the result of the consortium’s deliberate diversion of local waterways.  Riley seems to be enthralled with trompe l’oeil artwork and spouts sophistries at Dr. Sommerfeld: “I think I was meant to lead a different life.” It is also revealed that Aristidis is really “Krauss,” the mastermind of the scientists’ kidnapping, and is perfectly capable of walking on his own.

As Riley and Sommerfeld get a bit better acquainted, we get snippets of their backstories. The ecologist took this field assignment as a diversion from worrying about a daughter that the “baby daddy” took to Morocco four years ago while Riley is afraid of the dark. When they enter the salt flats, Riley shows her the huge dormant volcano, Uturunku, and explains that, when it erupts, it will obscure the earth’s atmosphere and bring terrestrial life to a halt,  the so-called “salt and fire” of the film’s title.  He implies that this catastrophe may be imminent, and then this storyline completely disappears from the film. 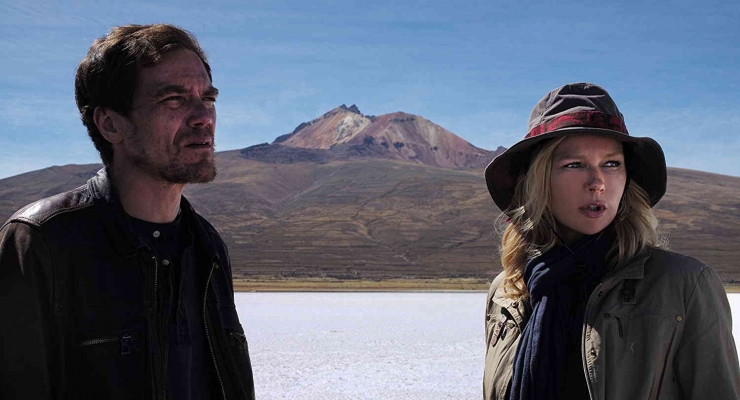 Riley and Krauss drive Laura into the flats and inexplicably abandon her to the company of two  nearly blind twin brothers Huascar (Danner Ignacio Marquez Arancibia) and Atahulapa (Gabriel Marquez Arancibia).  Dr. Sommerfeld quickly assembles a “base camp” from supplies that have been miraculously left behind. Later, the three stretch out on the salt flats and sense subterranean rumblings that may augur a future disaster.  As the water supply diminishes, Laura begins to lose hope that they will be ever rescued in time and viewers begin to lose hope that Salt and Fire has anything meaningful left to say.

Writer/director Werner Herzog (Fitzcarraldo, Aguirre Wrath of God) has written and directed numerous first-rate dramatic and documentary films; unfortunately, Salt and Fire is not one of them. What starts out as an eco-disaster flick comes a cropper in its seemingly endless footage of the salt flats, as this film’s scant storyline defers to Peter Zeitlinger’s cinematography and Ernest Reijseger’s monotonous score. Two of today’s better screen actors, Ferres and Shannon, are burdened with a campy and poorly scripted dialogue. Any hope for a Stockholm Syndrome relationship between captive and captor soon vanishes. If there is a modicum of enjoyment to be derived from this torpidly paced film,  it comes from the literally touching interactions between the two blind boys and the older woman bereft of her young daughter. Like many photographers and documentarians that have preceded him, Herzog was clearly intrigued by the ginormous vistas of the Bolivian salt flats. However, these images failed to arouse his creative genius. Unlike its title, Salt and Fire generates little if any heat or salinity and, sad to report, it is just a 90-minute dud. Salt and Fire is currently available on VOD in the US and DVD and digital versions will go on sale April 24, 2017 in the UK.