Cam is a thriller that explores the world of webcam models, otherwise known as “camgirls”. When one of the world’s oldest professions goes digital it creates a false sense of security. Women selling themselves online, in group chats or one on ones, from the safety of their own homes; their main interactions with clients are all online. What could go wrong?

Directed by Daniel Goldhaber and written by former sex worker, Iza Messei, Cam offers the audience a peek behind the curtain, revealing the true nature of an occupation the world knows so little about and yet is so deeply aware of. Madeline Brewer (The Handmaid’s Tale) leads the cast as Alice, the ambitious web cam model determined to pull any gory stunt to achieve a top 50 ranking. Every night Alice plans out her shows, from glitter bombs to death-defying stunts, each performance is a calculated approach to being the top in her field.

Though her fans adoration is flattering, Alice never once stops thinking in terms of business. It’s constant. Even when she’s not online doing live shows, she’s hustling tokens and tips from her phone. Being a web cam model isn’t as easy as it looks, it requires lighting, a thought-provoking set and consistent themes, after all a model has to keep it interesting for her regulars. For Alice, and may other webcam models, it’s a lonely business with few friends that exist offline. In real life what Alice does for a living is still a secret, but one that’s getting increasingly difficult to keep.

Sticking to a personalized code of conduct, Alice maintains a degree of separation from her online alter ego. She never does public shows, and she never says “I love you” to fans, it’s too personal. Even with those rules, it doesn’t stop one rather obsessed fan from tracking her down and meeting her in person, in the most unexpected of places. Alice must decide how dangerous one man’s obsession really is, and whether this stalker fan can be her ally as she faces an even greater danger. 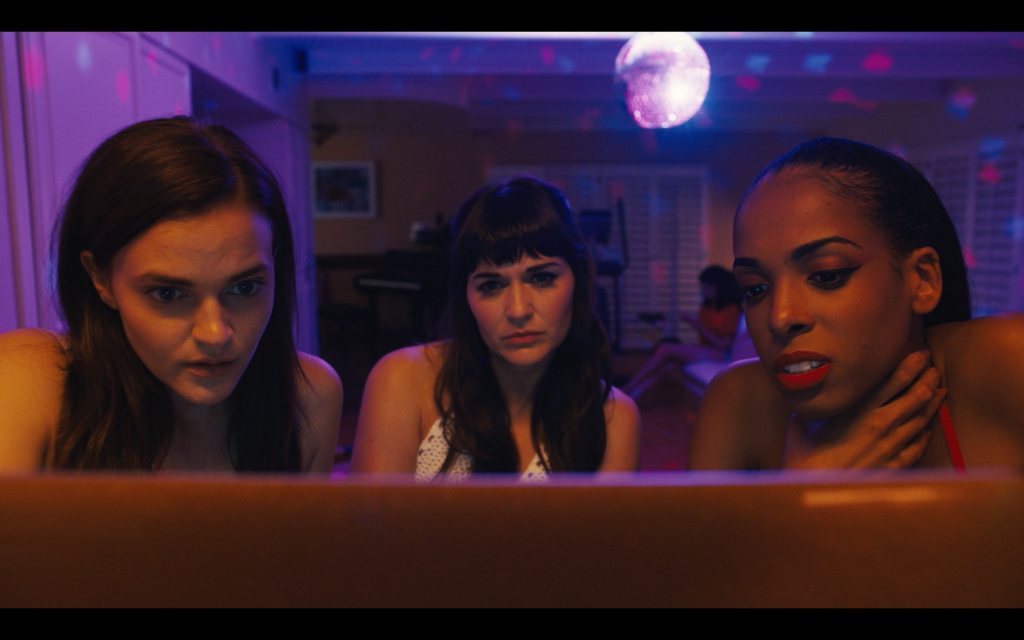 Without her online persona, her shows, her fans, Alice is lost in a world of her own creation. Locked out of her account and watching her life unfold as this doppelgänger hacker becomes more successful and popular than her own self; it’s as if she’s become another sort of Alice, like one from a Lewis Carroll tale.

Never one to play the victim, the same gumption that drove her to the top also propels her deeper into this dark web. In a shocking twist of events, Alice discovers the controlling interests behind her stolen life and soon confronts one of the cleverest identity thieves yet.

Cam simultaneously nails the reality of webcam models while exploring current technological possibilities, albeit frightening but certainly possible. However, it’s not without its embellishments. Brewer’s character Alice is known for her over the top quirky shows, performing stunts real life webcam models would never be allowed to do. At the first sign of blood or self harm, real or otherwise, the account would be terminated. Theatrics aside, the points made about society and our growing need for positive affirmation on the facades we present, shouldn’t be take lightly. At the end of this thriller, you’ll be so busy cheering Alice on, you’ll forget that what you’re really rooting for is her return to sex work. So few movies are capable of humanizing those who work in the sex business, without such compassionate writing, the audience may have seen a victim instead of a person, as they all too often do. Cam is a movie sure to keep you on the edge of your seat and provide plenty of thought-provoking scenes.

Cam is streaming now on Netflix

4.5 / 5 TheaterByte Rating
{{ reviewsOverall }} / 5 Users (0 votes)
Divide/Conquer | Blumhouse Productions | Gunpowder & SkyStudios & Distributors
TV-MARating Certificate
USACountry
EnglishLanguage
94 Mins.Run Time
1.85:1Aspect Ratio
Daniel GoldhaberDirector
Isa Mazzei (written by & story by) | Daniel Goldhaber (story by) | Isabelle Link-Levy (story by)Writer
16 Nov. 2018 (USA)Release Date
The Film
Summary
In this latest thriller from Blumhouse, written by former sex worker Isa Mazzei, a popular camgirl (played by The Handmaid's Tale's Madeline Brewer) finds herself replaced by a mysterious doppelganger who becomes more popular than she is. So few movies are capable of humanizing those who work in the sex business, without such compassionate writing, the audience may have seen a victim instead of a person, as they all too often do. Cam is a movie sure to keep you on the edge of your seat and provide plenty of thought-provoking scenes.
What people say... Login to rate
Order by: