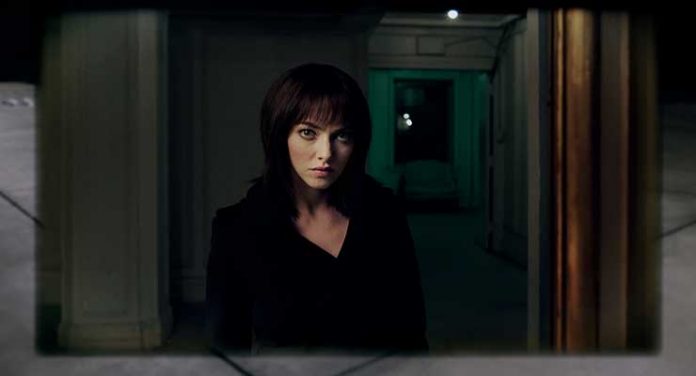 Netflix, these days, seems to catch me off guard than the norm. I was working on a project when all of a sudden, I got the prompt that something called Anon had just been released via the streaming format. I had to watch the trailer first and when I saw what it was about and who was involved I had to add it to my queue and watch it ASAP.

The film’s title is an abbreviation for “anonymous” or an “unknown person” in the terms of its plot. In this near-future privacy and anonymity do not exist. The population is “chipped” into reality. Walking around the city is like walking around with a pair of Google glasses but without the hardware since it’s implanted. Everyone in your line of sight has a description to their bio-stats, names, occupation, etc. This is sanctioned by the government, so it is all legal.

Sal (Clive Owen) is a police officer and on one uneventful day he notices a very attractive woman (played by Amanda Seyfried) walk by him. Caught off guard, he doesn’t realize until after she’s passed by that she has absolutely zero stats. In fact, when he rewinds the footage of her walking by him she is no longer there. It’s as if she’s been completely erased from reality.

As if on cue several folks across the city are being executed and all the leads seem to point to this “anonymous” person that Sal had a brief brush against. Before long Sal and the police department set up a sting to try to catch her for interrogation but she’s beyond smart and has a plan set up against any possible capture. Things end up going from bad to worse when Sal begins to develop feelings for “The Girl.”

I’ll stop myself right there before I totally go off of the deep end and spoil it for you. Anon a terrific science fiction film in the vein of Gattaca. In fact, they share the same visual aesthetic and production design. The buildings, cars, costumes, etc., look like they came from the Gattaca-verse. This may have something to do with the fact that Andrew Niccol (Gattaca, Lord of War, Good Kill).

The story plays like a cousin or even a side-quel to Gattaca. Another neat technique used in Anon is the way it was shot. The film itself was shot in 2.35:1 but when it switches to the person’s POV, in the virtual, world it shifts to an open matte 1.78:1. This multiple switching of aspect ratios keeps things moving at a brisk pace and even though there are “slow” parts the film is never boring. I actually wanted more and I hope that Niccol explores more of these stories in the future. They share the same visual aesthetic.

Netflix has been getting a bad rap with regards to their “original” film programming – folks say that DTV and bad films premiere on Netflix or go there to die. Well, this is not one of those films; It is one of the best of the Netflix Original films to be released this year. Anon is highly recommended.

Anon is streaming now on Netflix

4 / 5 TheaterByte Rating
{{ reviewsOverall }} / 5 Users (0 votes)
K5 Film | K5 International | K5 Media Group | NetflixStudios & Distributors
TV-MARating Certificate
USACountry
EnglishLanguage
100 Mins.Run Time
2.35:1 & 1.78:1Aspect Ratio
Andrew NiccolDirector
Andrew NiccolWriter
4 May 2018Release Date
The Film
Summary
In a world where anonymity no longer exists and law enforcement can easily recall the last few memories that anyone has experienced, a mysterious woman (Amanda Seyfried) with no identification threatens the order of things when she ends up at the center of a detective's (Clive OWen) investigation into a string of murders where high profile victims' eyes and memories were hacked. Anon is an entertaining near-future cyberpunk romp that relishes in its cold and sophisticated environment. If you loved Gattaca then you will love Anon.
What people say... Login to rate
Order by: