It is March 2003 and the Iraq War has just begun. Private Matt Ocre (Nicholas Hoult, X-Men: Apocalypse) has just enlisted in the Army.  To avoid going to the front, Ocre deliberately breaks his hand in the door of a Hummer, but this ploy fails, and, after a few weeks in a cast, he is sent to Baghdad with his new “best friends”: Sergeant Dylan Chutsky (Glenn Powell, Hidden Figures), Sergeant Burton (Beau Knapp, The Finest Hours), Corporal Enzo (Neil Brown, Jr., Straight Outta Compton), and platoon leader Staff Sergeant Harper (Logan Marshall-Green, The Invitation).

The platoon is then deployed to Baqubah, about 30 miles north of Baghdad, where they join a special forces unit commanded by Captain Syverson (Henry Cavill, The Man From U.N.C.L.E.). The men are assigned to help repair a broken water main that supplies the village and while repairs are in progress, the platoon fills a tanker and makes daily water deliveries to the villagers.

Syverson and Harper have a sit-down meeting with the local Sheik (Salim Dau, Prisoners of War) and, with the help of translator Mahmoud (Sammy Sheik, American Sniper), try to get the old man to help them recruit villagers to help with the repair work but he refuses. The outcome of this meeting provides the core of this film’s story as it focuses on the extreme difficulties in working with the people in a country that we have invaded and who remain quite suspicious of our motives. This is compounded by the notion that those who cooperate with the American forces could be viewed as collaborating with the enemy. 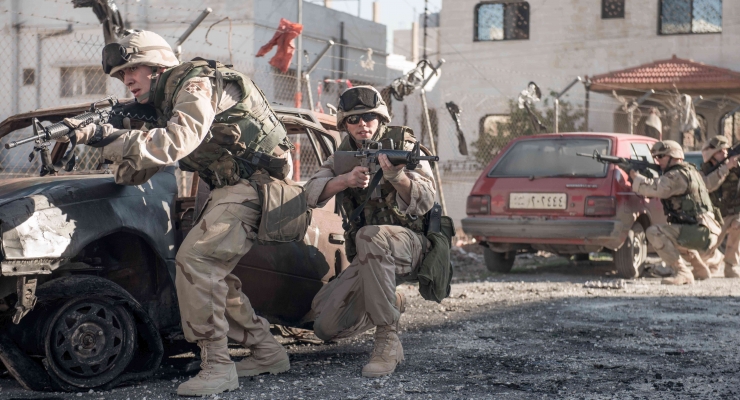 The repair project turns out to be much more dangerous than expected as the soldiers are attacked on a water delivery run and again in the town square while distributing water. Realizing that they need help from the villagers if the water main is to be fixed on time, the men meet with Kadeer (Navid Neghaban, Homeland), the school principal, who recruits enough villagers to resume the repair work. As Sand Castle progresses, we are exposed to the continual frustrations and hazards of waging a foreign war.

Sand Castle is based on the wartime experiences of scriptwriter Chris Roessner who served as a machine gunner in the dangerous Sunni Triangle. Noted Brazilian film director Fernando Coimbra (A Wolf at the Door) makes his English-language film debut a gritty success in a genre quite different from his previous work. Similar to other Iraq war era films like The Hurt Locker and American Sniper, the action alternates between tense battle scenes and the soldiers’ somber reflections but there is less actual fighting and more introspection in Sand Castle. With a deliberate pace and terse dialogue, we receive a very personal account of men who continually risked their lives in this controversial conflict. The cast is strong from top to bottom and their characters seem quite credible. This film effectively portrays what it was like to be a youth who finds himself overwhelmed by the realities of war and, through his tour of duty, matures into a much more responsible man by the film’s sobering conclusion.

Sand Castle is currently available for streaming exclusively on Netflix.