It’s been six months since the first film from Netflix: Godzilla: Planet of the Monsters made its debut. Now the second part of this new anime trilogy has hit the streaming platform entitled: Godzilla: City on the Edge of Battle. Yes, the name is cumbersome, but the big guy, in his “Godzilla Earth” incarnation promises even more breathtaking surprises.

The film starts back up 20,000 years after Godzilla pretty much destroyed the Earth. Its inhabitants were forced to leave and travel the stars along with alien humanoid races called Aratrum. City on the Edge of Battle starts off immediately after Planet of the Monstersin that twin females called Miana and Maina of the Houtua tribe save Haruo from death.

In a wild land filled with vegetation and other flesh-eating monsters – the Houtua live their days as hunters and foragers. They’re basically the descendants of mankind or what was left of humanity. Their weapons are primitive with the exception of their ammunition. Their arrowheads are made out of Nano technology. The survivors hypothesize that the Nano remnants are from what was left of Mecha-Godzilla all those thousands of years prior.

With Godzilla Earth still far outside of the perimeter and the discovery of a Nano-technology “city” Harou and his colleagues cook up a trap for the big guy in creating advanced weaponry made out of the remnants of Mecha-Godzilla. This part of the story was really neat in terms of execution. I always liked the Mecha-Godzilla character and design but to see it as a city of sorts with artificial intelligence properties was super cool. 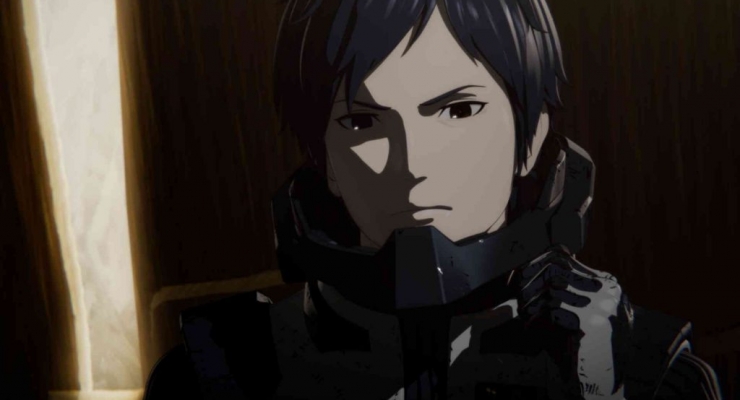 Godzilla: City on the Edge of Battle does take longer to get to the action than Planet of the Monsters due to the introduction of new characters and landscapes. Once the party gets started and Godzilla makes his way towards our heroes – the rock n’ roll begins. There are some phenomenally animated sequences featuring some advanced mech suits that some of our heroes use to try and subdue Godzilla along with the big guy’s own defense mechanisms. I will say that the action begins roughly at the halfway point of this 101-minute film.

I started watching City on the Edge of Battle in English but the dubbing is awful, so I switched it to original Japanese with English subtitles and that made a world of difference. The Japanese language track is in full Dolby Digital 5.1, too. The animation and some of the CGI enhancements made to the character still look cool. There scenes where it seems that Godzilla is so big he can hardly walk but when the shift in perspective changes or we go to an overhead shot – you can clearly see him covering massive ground.

Godzilla: City on the Edge of Battle is streaming now on Netflix