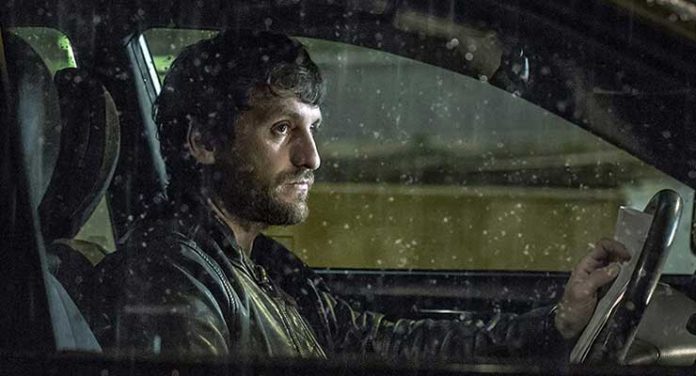 The Warning (El aviso) is the latest Netflix acquisition from Spain. The film is a dramatic-thriller, with some supernatural flourishes. As two best friends Jon (Raúl Arévalo)and David (Sergio Mur) stop off at a gas station David is shot in the head and critically wounded during a robbery in progress. Jon stayed in the car to wait for his friend and the guilt piled on him like a ton of bricks. This all happens on April 2, 2008.

The Warning flashes forward ten years to April 2, 2018. Young Nico (Hugo Arbues) is visiting the same convenient store – coerced by the school bullies to steal an adult magazine for them.

His mother, Lucía (Aura Garrido), finds him and he leaves the magazine and buys a video game magazine instead. The store owner catches him but lets him off with an ominous warning. A note has also been found inside the magazine, with a dire warning, that he comes back to the gas station on April 12, 2019, he will die.

How are Jon and Nico connected? Well, that’s the conundrum. They’re really not. Jon and his misfortune happened ten years before Nico was born. Yes, Jon is still alive ten years later, but he’s a bit of a schizophrenic, and is on medication. He’s a fully functional member of society but tends to go off on rants and whatnot when he has not taken his medication. In this case and with the PTSD he suffered the night his friend was killed, and later in the future, he will hypothesize and theorize that there is a mathematical reason to everything that has gone on in his life: past, present, and future. 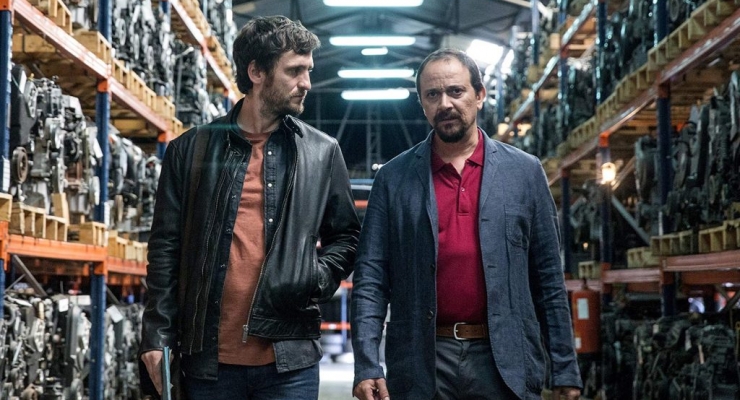 To say that The Warning takes some thinking, more than the usual, would be an understatement. I hate math, so I thought it was going to make my head hurt but instead it had me riveted until the very end. Once Jon starts to figure out the various mathematical probabilities, etc., the film kicks it into high gear. The initial set-up is also fascinating and there are a few characters and timelines that the viewer has to navigate through. The Warning requires your attention

As a film and piece of aesthetic art – it’s a great looking film with a great set of actors – I recognized Aura Garrido from the excellent Ministry of Time (El Ministerio del Tiempo). She looks like the complete opposite of her character on that series – the modern setting of The Warning does her well.

I’ve been seeing a lot of chatter with regards to Netflix’s slate of “originals” and see that folks tend to put their domestic offerings down while embracing their foreign offerings. In the case of The Warning – it’s a fantastic film that may challenge the viewer more than usual. In retrospect, Netflix could very well make a series out of the film,  expand on the timelines, what they all mean, how they converge, and so on. The Warning is ripe for further exploration and is highly recommended.

The Warning (El aviso) is streaming now on Netflix

3.5 / 5 TheaterByte Rating
{{ reviewsOverall }} / 5 Users (0 votes)
Film Factory | Morena Films | Movistar+ | The Warning of Rivard | Tormenta Films | ICAA | RTVE | NetflixStudios & Distributors
TV-14Rating Certificate
SpainCountry
SpanishLanguage
92 Mins.Run Time
2.39:1Aspect Ratio
Daniel CalparsoroDirector
Patxi Amezcua | Jorge Guerricaechevarría | Chris Sparling | Paul Pen (novel)Writer
24 Jul. 2018 (Netflix)Release Date
The Film
Summary
Ten-year-old Nico (Hugo Arbues) receives a warning letter not to return to a gas station where years earlier people were murdered. No one believes that he may be in danger except one man, Jon (Raúl Arévalo) who has a connection to the place after witnessing the murder and believes there may be a strange connection< stretching back longer than people know. The Warning features a complex plot, but the highly stylized film keeps the viewers interested and constantly guessing. Netflix seems to be acquiring a fairly decent amount of foreign films and most of them are winners. The Warning is no exception.
What people say... Login to rate
Order by: